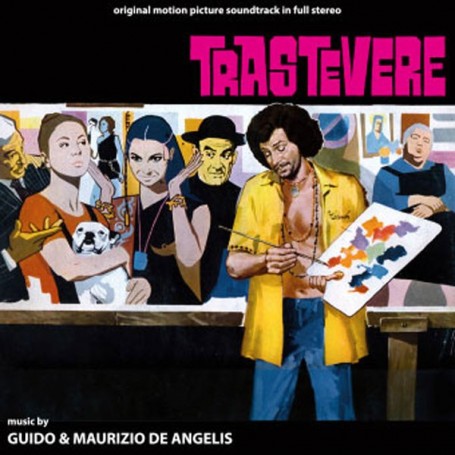 Digitmovies is pleased to present on CD, for the first time ever, complete and in full stereo, the OST of the legendary De Angelis brothers from the movie "Trastevere", directed in 1971 by Fausto Tozzi and starring Nino Manfredi, Ottavia Piccolo, Rosanna Schiaffino, Vittorio Caprioli, Vittorio De Sica, Mickey Fox, Ronald Kerry Pennington, Leopoldo Trieste, Milena Vukotic, Gigi Ballista. An elderly opera singer loses his dog in the popular Roman district of Trastevere. The creature, wandering the alleys and squares and passing into the hands of its provisional masters, is "witness" to a series of episodes that affect the life of the neighborhood. A shabby old woman is forced by her family of smugglers to give herself up to the police on their behalf. A former agent of the Narcotics Squad, with the drug habit, is arrested after being denounced by an unrequited lover. The inconsolable widower of a prostitute - who supplies comfort items as a living to streetwalkers - stubbornly continues the search for the man who killed his wife. A depraved intellectual favors the coupling of his wife with a young butcher. A "hippie" American, after an abnormal relationship with a mature aristocrat, kills himself. An old usurer dies of heart failure during lunch, after a pilgrimage to the Santuario del Divino Amore (Shrine of Divine Love). At that time, IT Discs released a 33 rpm (It ZSLT 70005) with eleven selections with a total time of 28:54 minutes and a 45rpm (It ZT 7024) with the tracks "Trastevere" sung by Nino Manfredi and the instrumental "Kerry." For our CD, lasting a total of 59:35 minutes, in addition to the stereo master tapes of the album of 1971, we also had access to the master, in stereo, of the original recording session, which allowed us to use every note recorded at that time. The OST is based on the main topic of popular taste "Trastevere" (in the words of director Tozzi), introduced in the title track by the voice of Nino Manfredi (Tr. 1) and reprised in instrumental version (Tr.7, Tr.13, Tr.19). This exciting melody is alternated with other themes composed for the other characters in the film, such as "Grandma's dance" (Tr. 3) folk flavored, but with modern arrangements and Indian music on the sitar (Tr.4). For Kerry, the De Angelis brothers wrote a country tune (Tr.8, Tr.15), but the negative events that disrupt the life of this character are highlighted by dramatic and rock flavored orchestral passages, (Tr.5, Tr.10, Tr.12, Tr.17, Tr.20, Tr.23). We include among the various extras a version with a different ending of "Grandma's dance" (Tr.14) and a rare alternative take of the vocal by Nino Manfredi (Tr.24). A CD that wishes to pay homage to the Musical Art of Guido & Maurizio De Angelis and the Cinema of the unforgettable Nino Manfredi.