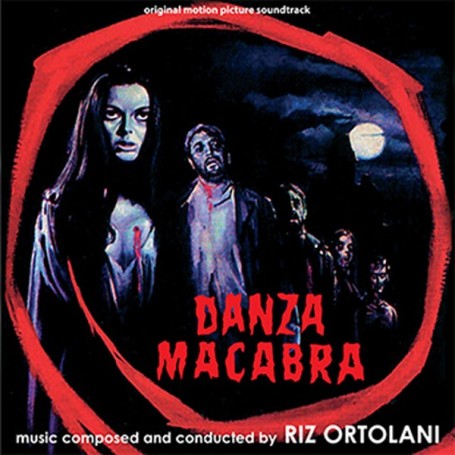 Digitmovies, in collaboration with the Sugar Group, is pleased to present, for the first time on CD the complete OST by Riz Ortolani from the gothic black and white film "Blood castle" directed in 1964 by Antonio Margheriti and starring Georges Rivière, Barbara Steele, Phil Karlson, Raoul H. Newman, Margarete Robsahm, Umberto Raho, Salvo Randone, Benito Stefanelli, Silvia Sorente, Silvano Tranquilli. London suburbs: a journalist called Alan Foster (Rivière), is sent to interview the famous macabre writer Edgar Allan Poe (Tranquilli). Foster is sceptical when Poe tells him that his stories really happened and he is not a novelist, but a reporter. They make a pact, Alan agrees to spend All Souls night, on November 2, alone in the abandoned castle of Lord Blackwood. If he spends the entire night without escaping, at dawn he will receive from the Lord himself, a reward of one hundred pounds. Alan, he went into the castle, where he meets a beautiful woman, Elizabeth Blackwood (Steele), but does not realise that she is a ghost, a "not dead." During the long night that seems to have no end, she will make him relive the events that led to her death along with the other ghosts who flock to the castle on that night of horror. Alan gets involved by his beautiful guest, and will eventually fall in love, not realising that he was the next sacrificial victim of the ghosts whom they need to be able to come back to life, at least for one night. Just before dawn, when all the ghosts / vampires rise up and chase him to kill him, Elizabeth defends him, helping him escape and thus sacrificing her own life. Dawn arrives and the ghost of the woman disappears, leaving Alan to safety near the gate. But the curse of the castle will hold Foster a fate worse than death. Director Margheriti (under the pseudonym Anthony M. Dawson) filmed, in 1971, a colour remake entitled "In the grip of the spider" starring Anthony Franciosa in the role of Foster, Michèle Mercier in that of Elizabeth Blackwood and Klaus Kinski in the role of Poe; music as always by Riz Ortolani. To make this CD (53:10) we were able to access the mono master tapes of the original recording session, publishing every note recorded at the time. Riz Ortolani composed a perfect OST to describe the gothic atmosphere of the story by writing a dramatic theme of the main credits (Tr.1) where the author introduces fragments of a waltz classical flavour that will be taken up in the film (Tr.9, Tr.12, Tr.15, Tr.20) based on a melodic theme of love (Tr.6, Tr.8, Tr.14, Tr.18) alternating atmospheres of terror rendered by the organ effects mixed to the orchestra (Tr.4, Tr.5, Tr.7, Tr.10, Tr.11, Tr.13, Tr.16, Tr.17, Tr.19).