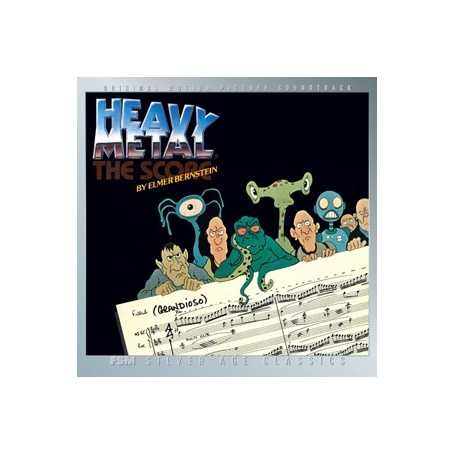 One of the great ironies of soundtrack collecting is that one of the most fantastic symphonic scores ever written is for a movie entitled “Heavy Metal.” The 1981 animated feature Heavy Metal (adapted from stories published in the magazine of the same name) was an adult-oriented anthology with copious amounts of sex and violence. Sporting a hit soundtrack of contemporary pop-rock songs (licensing of which delayed the film’s video release until 1996), the film also benefited from an extraordinary symphonic score by Elmer Bernstein which did the lion’s share of the musical storytelling. (Bernstein was, at the time, the regular composer for producer Ivan Reitman.)

To put it simply, Heavy Metal is Elmer Bernstein’s Star Wars—a rich, vital, thunderingly symphonic work bursting with melody and drive. The anthology nature of the film allowed Bernstein to write distinct melodies for the disparate segments: from the heroic anthem of “Den” to the moody film noir stylings of “Harry Canyon,” and, especially, the soaring chorus and ondes Martenot of “Taarna”—the latter adapting the composer’s rejected love theme from Saturn III (1980).

Heavy Metal: The Score has long been desired by soundtrack collectors. FSM releases not only the original LP but the complete score remastered from the composer’s personal 1/4” stereo tapes (in excellent sound quality). The cues are presented in chronological order, with bonus tracks of selections edited for the 1981 Asylum Records LP—meaning listeners can, if so inclined, program a recreation of the original album sequence.

Liner notes for this historical and long-anticipated CD are by Paul Andrew MacLean, drawing from interviews with Bernstein and including new comments from orchestrator David Spear, who adapted two of the cues from Bernstein’s thematic material. The package is beautifully illustrated with stills from the film.