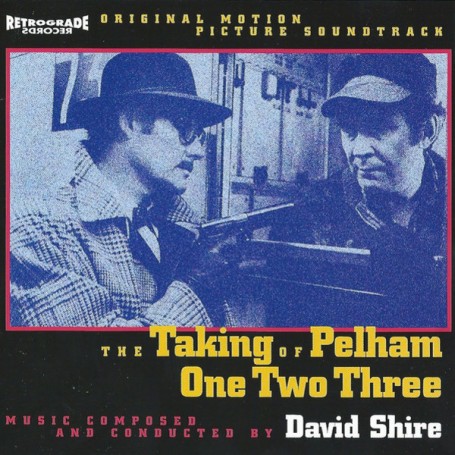 The Taking of Pelham One Two Three is a superb urban thriller: four men, dressed alike in trenchcoats and calling each other Mr. Blue, Mr. Green, etc., take a subway car hostage and demand $1 million in ransom. Walter Matthau stars as the transit cop assigned to the case; Robert Shaw (Quint in Jaws) is the leader of the terrorists. It's a brilliant ’70s hostage movie with biting New York humor.

For the score, David Shire—then going through a brilliant stretch of work which included The Conversation, Farewell, My Lovely, The Hindenburg, and All the President's Men—came up with a stroke of genius. He wanted to do some kind of funk/jazz/big band, but wanted a way of making it dissonant and powerful—not too light, but not too random. So for his melodic materials he utilized the 12-tone method of composition, a technique devised by Arnold Schoenberg in the early 20th century in which you make a theme by using all 12 pitches in a specific order, and then create other themes by playing that "row" backwards, upside-down, backwards and upside-down, or transposed. Shire ended up with a monster two-note bass line with these 12-tone themes running on top.

For our CD, the first-ever release of this music, we have utilized the complete score, including around 15 minutes of music not included in the film. The 12-page booklet includes movie stills, composer photos, and track-by-track notes by Doug Adams.

Listen to the "Main Title" and decide for yourself—if you like funky '70s film music, like Enter the Dragon and the blaxploitation pictures, you'll love this.