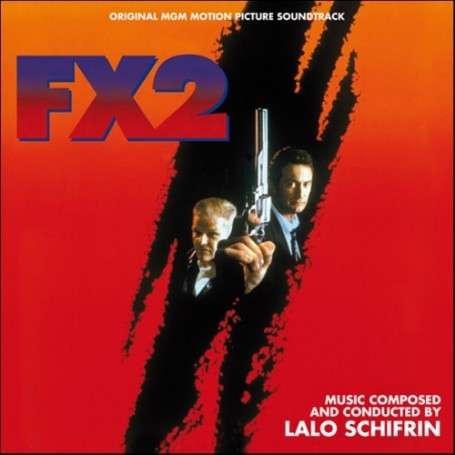 The 1991 film F/X 2 was a sequel to the successful 1986 thriller F/X, directed by Robert Mandel. The idea of a movie special-effects man being brought in to use his cinematic illusions to thwart mob attempts to kill him was an innovative novelty, and made for a clever and engaging thriller which became one of the blockbusters of the mid-eighties. A sequel to this film was not a surprise. Although the cast was the same as in the first film (Bryan Brown and Brian Dennehy), the director of F/X 2 was the Australian Richard Franklyn (Patrick, Psycho II, Link).

Another important change was the composer. For F/X, Bill Conti had written an excellent suspense score performed by the London Symphony Orchestra. For the sequel (more an action film than a suspense film), the producers wanted a more rhythmic, modern-sounding score. The choice of Lalo Schifrin was natural because the composer had written exciting and innovative scores for such action-thrillers as The Osterman Weekend, The Fourth Protocol and two Dirty Harry sequels: Sudden Impact and The Dead Pool. The score of F/X 2 is an exciting hybrid of Schifrin’s taste for electronics and orchestra, full of action cues, suspense sounds and great source pieces.

When the film was completed, the producers demanded some changes in the editing and the music, but Schifrin was not available at the time. The session keyboardist and composer Michael Boddicker was responsible for rescoring some portions of the film. This release includes the complete Schifrin score, as he conceived it for the movie, sequenced in film order and including every second of music recorded by Schifrin for the film.