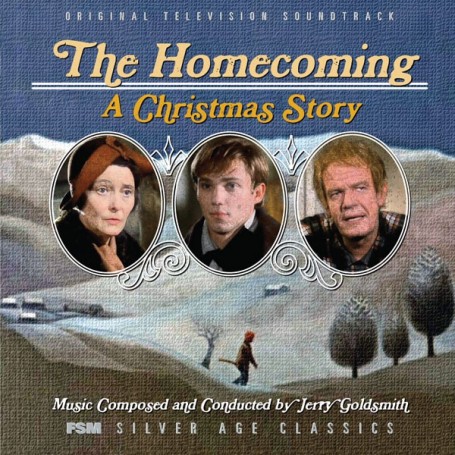 THE HOMECOMING / RASCALS AND ROBBERS

The repertoire of outstanding film music composed over the past eight decades includes a wide variety of significant contributions in a style that might loosely be called “Americana.” FSM combines two such scores—both previously unavailable in any format—on this single CD.

Fans have long desired a release of Jerry Goldsmith’s folksy, intimate music for The Homecoming: A Christmas Story—a 1971 television movie which led to the popular series, The Waltons. Patricia Neal and Richard Thomas starred in the heart-warming story of a rural family’s Christmas in 1933. Although the film was made quickly and on a limited budget, Goldsmith pinpointed the emotional core of the drama with a number of memorable themes. Sometimes lyrical and sometimes suspenseful, the music is consistently direct and captures the child-like sense of wonder that permeates the film. The composer arranged his score for a small orchestra that featured a core group consisting of two guitars, harmonica, accordion, recorder and harp.

For this premiere CD release, the complete score (including some passages that were cut from the film) has been mastered from ¼" monaural tapes in the CBS Inc. Film and Television Collection at UCLA Performing Arts Special Collections.

CBS premiered Rascals and Robbers: The Secret Adventures of Tom Sawyer and Huck Finn (1982) just over a decade later. It featured Mark Twain’s iconic characters in a new story involving con men and gullible townspeople. Dismissed by critics as a “kiddy movie,” it is best remembered today for its highly enjoyable score by a young James Horner, completed mere days before he began work on his breakout success, Star Trek II: The Wrath of Khan.

Horner recorded his music with a 37-piece orchestra at CBS’s Radford Facility—possibly the budding composer’s first experience on a soundstage. From the eerie sound of bass harmonica which colors the villain’s galloping, minor mode material, to the buoyantly optimistic and uplifting theme for Tom Sawyer, the score bursts with energy and fresh ideas. Astute listeners will note some of the composer’s musical trademarks already surfacing in this early effort. The complete score is newly remixed and mastered in glorious stereo from ½" three-track masters in the CBS collection at UCLA.

FSM augments its CD of these two homespun classics with a 20-page booklet containing essays and track-by-track analyses for both productions (by Jeff Eldridge and Frank K. DeWald) as well as a brief history of Goldsmith’s work for The Waltons.

The Homecoming: A Christmas Story
Music Composed and Conducted by Jerry Goldsmith

Rascals and Robbers: The Secret Adventures of Tom Sawyer and Huck Finn
Music Composed and Conducted by James Horner