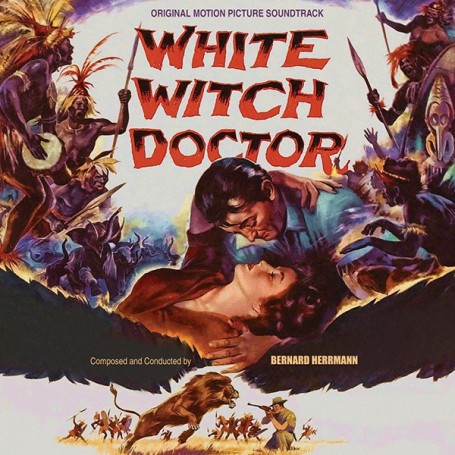 White Witch Doctor, based on the 1950 novel by Louise A. Stinetorf, was a Technicolor adventure film filled with action and romance, and two stars, Robert Mitchum and Susan Hayward who were not only wonderful actors, but who exuded sex appeal.   Director Henry Hathaway shot the film both on location and the Fox backlot – the beautiful photography was by ace cameraman Leon Shamroy.  But what really sets the film apart from other African-set films of that era (and there were a lot of them) is the incredible score by Bernard Herrmann.

By 1953, Herrmann was already a Fox regular and both Alfred Newman and Zanuck were huge fans of his.  For White Witch Doctor he delivered one of his greatest scores, yet not one that is known much these days.  The film begins with the kind of main title that just propels you into the movie – pervasive percussion and drums over exciting strings and brass, clanging bells, and winds run amok – no one did this kind of main title better than Herrmann.  Much of the score is breathtakingly beautiful with Herrmann’s amazing orchestral textures and colors.  It also includes several appearances by the weird and ominous-sounding instrument the serpent to underscore suspenseful moments – an instrument he would also make great use of several years later for Journey to the Center of the Earth.  Every cue is infused with Herrmann’s unique and brilliant harmonic character – in fact, much of the score plays like a preview of scores he would do for Hitchcock and the fantasy films that came later.  There was no one who did it like Herrmann and this is one of his all-time great scores.

White Witch Doctor’s first release on CD was part of the big Bernard Herrmann at Fox box on Varese Sarabande.  That set was a quick sellout and many fans missed out on its myriad pleasures, White Witch Doctor being among the best of them.  It’s presented in that wonderful Fox push-pull stereo and the score sounds absolutely splendid.