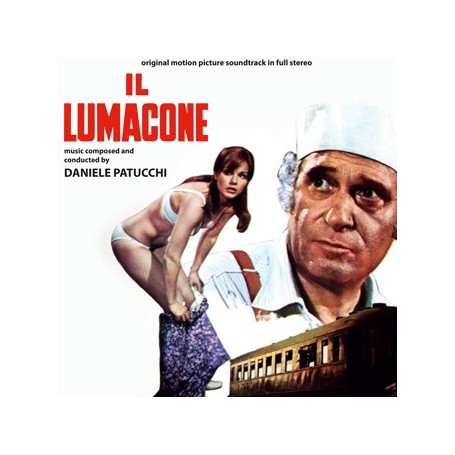 This CD was made from the stereo master tapes from the recording sessions of 1974. Daniele Patucchi composed two intense orchestral musical scores with a Sicilian flavor. In “The Big Snail” Turi Ferro plays an elderly Sicilian chef who lives in Rome, while in “Virility” he plays the big-time boss of a canned fish business off the Eastern coast of Sicily. Moments of sentimentality alternate with funny and happy melodies. Turi Ferro sings the main theme of “The Big Snail” in dialect and Rosanna Fratello sings the theme of “Virility.” At the time C.A.M. had only released two singles from these films – “Virilità” CAM AMP 129 and “Il Lumacone” (“The Big Snail”) CAM AMP 148.

THE BIG SNAIL:
Gianni is a Sicilian cook who goes to live in a basement with Ginetto, a cheap small-time crook, after being left by his wife. Gianni has one dream- to buy a railway car and transform it into a restaurant where Ginetto can work.

VIRILITY:
Don Vito runs a canned fish business in a large village along the coast of Eastern Sicily. Divorced from his wife, he marries Cettina, a beautiful young shop assistant. He boasts about his manliness to everyone in the village and shows it by persistently harassing the girls who work for him. His son Roberto returns to the village after studying for three years in England and brings his lover with him, an English girl who looks more like a boy with feminine features. Following tradition, Don Vito and the pharmacist Don Bartolo agree to arrange Lucia to marry Roberto. But he refuses and sticks by the dubious English girl, earning him the reputation of being gay. In the meantime Roberto and Cettina fall in love and betray Don Vito. Mocked as the father of a child with no manliness, the desperate Don Vito can think of nothing better than to publicize the relationship between his wife and his son and bless their marriage.