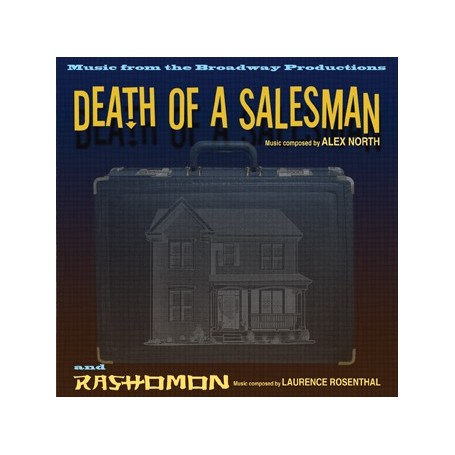 DEATH OF A SALESMAN / RASHOMON

DEATH OF A SALESMAN Music by Alex North

“Attention must be paid,” and sixty years ago, on February 10, 1949, attention was paid, instantly and loudly when Arthur Miller’s Death Of A Salesman opened on Broadway at the Morosco Theatre. It ran over 700 performances and was an instant sensation, garnering Tony Awards for Best Play, Author, Director, Supporting Actor, Set Design, Producer, as well as winning the Pulitzer Prize. The incidental music for the Broadway production was written by Alex North, who would, of course, go on to work with Salesman’s director, Elia Kazan on several more projects, including the film of A Streetcar Named Desire. The music is classic North, scored for a very small ensemble that somehow never seems small, but just seems right. He would later use many of the themes in the film version, but there’s something about these lean and spare original versions that are haunting and wonderful.

Rashomon began life as two short stories by noted Japanese writer Ryunosuke Akutagawa. They were famously adapted for the screen by Akira Kurosawa in 1950. The film won an Academy Award and became an instant classic, the film telling the same story from multiple viewpoints. In 1959, Fay and Michael Kanin adapted Rashomon for the stage, using many elements from the Kurosawa film that were not present in the short stories. The Broadway production ran for 159 performances. The cast featured the then husband-and-wife team of Claire Bloom and Rod Steiger, and the supporting cast featured Oscar Homolka, Akim Tamiroff, and Ruth White, among others, and the director was Peter Glenville. Laurence Rosenthal provided the striking incidental music, which has a Japanese flavor, but filtered through Rosenthal’s brilliant musical sensibilities. Rosenthal would go on to score many classic films, such as A Raisin In The Sun, The Miracle Worker, and three films by Rashomon director Glenville, Hotel Paradiso, The Comedians, and the classic, Becket.

A note on the sources: The Rashomon source material was in excellent condition and is presented in stereo. Death Of A Salesman was mastered from disc – several copies were used and all suffered from the same sound anomalies. Our mastering engineer has done the best possible job in cleaning up the sound, but the fact remains that the sound on Death Of A Salesman is archival in nature – but we felt that releasing the music far outweighed the less than optimal sound. We hope you agree. Due to the archival nature of Death Of A Salesman, we are offering this CD at a special lower price. A must for both theatre and film score fans!