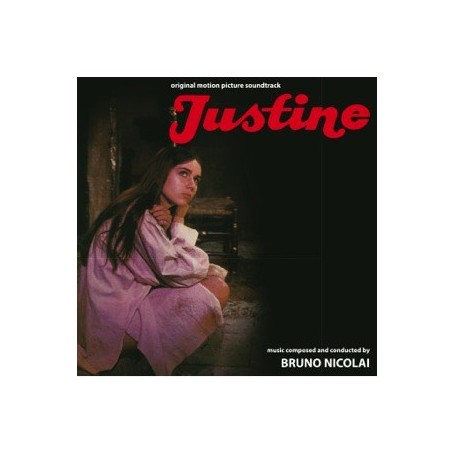 Digitmovies releases the complete soundtrack for the film “Marquis de Sade's Justine” (aka “Justine, ovvero le disavventure della virtù”). Soundtrack: Jess Franco chose Bruno Nicolai to create the soundtrack for this film as well as others including: “99 Women” (“99 Donne”), “Les chauchemars naissent la nuit”, “Il trono di fuoco”, “Eugenie”, “Count Dracula” (“Il conte Dracula”), “Dracula vs. Frankenstein” (“Dracula contro Frankenstein”), “I desideri erotici di Christine”, “De Sade 2000”, and “Violenze erotiche in un carcere femminile.” Bruno Nicolai (1926-1991) was a composer and orchestra conductor who conducted numerous soundtracks for Ennio Morricone, Carlo Rustichelli, Luis Bacalov and Nino Rota. His most famous scores were for the films by Jess Franco, including the thrillers “The Night Evelyn Came Out of the Grave” (aka “La notte che Evelyn uscì dalla tomba”), “The Case of the Bloody Iris” (aka “Perché quelle strane gocce di sangue sul corpo di Jennifer?”), “All the Colors of Darkness” (aka “Tutti i colori del buio”), and for the Spaghetti Westerns “Run Man, Run” (aka “Corri uomo corri”), “Gentleman Killer” (aka “Gentleman jo... uccidi”), and “Have a Good Funeral, My Friend” (aka “Buon funerale amigos! paga Sartana”). The soundtrack for “Justine” came out on vinyl in 1969 (Gemelli 10013) with 18 tracks (32:53 minutes), and then on CD in 1997 with the same tracks and length under the label Edi-pan (PAN CD 2503). For our CD we had access to the original master tapes and have included all the material recorded for the film, for a total of 27 tracks (56:25 minutes). Plot: The Marquis De Sade (Kinski) passed his days in delirious visions which inspired the manuscript for the novel about the adventures of Justine and Juliette, two young sisters living in France in the XVIII century. Justine (Power) and Juliette (Rohm) are forced to drop out of the nunnery when they are suddenly left orphans. The blond and depraved Juliette goes to work in Paris at Madame de Buissonʼs (de Lirio) brothel and eventually becomes the mistress of a count. The dark-haired Justine takes up residence at Monsieur du Harpinʼs (Tamiroff) house and works as a maid. When she refuses Monsieur Derrochesʼ (Du Harpinʼs master) advances she is unjustly accused of stealing and is sent to prison and condemned to death. She escapes with the help of Dusbois (McCambridge), the most famous criminal in France. During her getaway she chances upon the romantic painter Raymond (Leipnitz), who hosts her at his house. Wanted by the police, Justine must leave her love nest and hide in Marquis de Bressacʼs (Frank) palace, where she works as his personal waitress. The homosexual Marquis kills his wife and frees himself of the waitress, but not before searing the letter “M” onto her chest (which at the time was a mark of shame). Justine takes shelter in a convent, where she is received very affectionately by Brother Antonin (Palace) and the other Brothers. The Brothers turn out to be a bunch of sadists who soon start torturing Justine, as they have already done to the other young female guests at the convent. During a fire, Justine seizes the moment to escape but is soon intercepted by Dusbois who forces her to appear nude in a theatre production. During the show, the audience sees the “M” on her chest and accuses her of murder. Justine is just about to be arrested when her sister Juliette intervenes by asking her lover to free Justine. The sisters are reunited and Justine is finally able to fulfill her dream of being with the painter Raymond, her future husband. The Film: Directed in 1968 by Jesús Franco. Starring Romina Power, Maria Rohm, Klaus Kinski, Carmen de Lirio, Akim Tarmiroff, Gustavo Re, Mercedes McCambridge, Horst Frank, Harald Leipnitz, Jack Palance. The screenplay, signed by the producer Harry Alan Towers, was based on “Justine” by the Marquis de Sade. TRACK LIST 01. JUSTINE 2:23 02. LA CORTIGIANA 1:48 03. PASSIONI DELLʼANIMA 3:25
04. IL PELLEGRINO * 2:35 05. AMAZZONI 1:57
06. MATTUTINO * 2:21 07. JUSTINE 2:12 08. BURLESCA 1:38 09. MERCATO 0:59 10. PASSIONI DELLʼANIMA 1:58
11. IL TRIONFO DELLE DAME 1:35
12. IL MONELLO 1:04 13. IL CONTADINO 1:19 14. LA FESTA DEL VILLAGGIO 1:28
15. JUSTINE 2:41 16. FROTTOLA 1:42 17. IL GHIOTTONE 1:37 18. PASSIONI DELLʼANIMA 1:21 19. CERCHIO MAGICO 1:45 20. IL RITORNO 1 1:15 21. IL RITORNO 2 1:58 22. PASSIONI DELLʼANIMA 4:59 23. IL TRIONFO DELLE DAME 1:16
24. IL GHIOTTONE 2:04 25. BURLESCA 2:11 26. PASSIONI DELLʼANIMA 2:58 27. JUSTINE 2:23