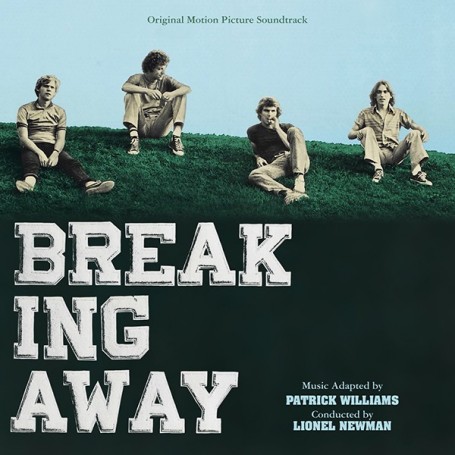 Breaking Away, a wonderful coming-of-age story, took critics and audiences completely by surprise in 1979 and the film was an instant box-office and critical success. Steve Tesich’s warm, wise and wonderful screenplay touched a nerve in audiences and Peter Yates, the director, did a masterful job telling its quintessentially American story. The cast was filled with up-and-coming young actors like Dennis Christopher, Dennis Quaid, Daniel Stern and Jackie Earle Haley, as well as seasoned actors like Barbara Barrie and Paul Dooley.

Director Yates temp-tracked Breaking Away with classical music while he and his editor were working on the film. Then he brought composer Patrick Williams on board. Williams saw the film with the temp track and told Yates that if that was what he wanted that it was okay with him and Williams would just adapt that music. But Yates, instead, told him to do his thing and perhaps adapt some of the classical bits but also write an original score around them. And that is what Williams did, creating some wonderful dramatic cues in the process. After the film previewed, Yates ultimately made the decision to go with almost all of his temp track, save for a small amount of the original Williams music. And so, Williams and conductor Lionel Newman convened for a second recording session to record more of his adaptations, and that was that. In the end the score was comprised mostly of music by Gioacchino Rossini, Felix Mendelssohn and Friedrich von Flowtow. After the heartbreak of having to replace his original dramatic cues, the irony was, of course, that Williams received an Oscar nomination for Best Music – Original Score and Its Adaptation or Best Adaptation Score.

For this world premiere CD release, we give you all of the classical pieces that Williams adapted (and adapted superbly), as well as his original score cues, both used and unused. For listening purposes, we’ve taken the liberty of inserting a handful of Williams’ unused cues into the score presentation, because they work so beautifully there. The rest are included in the bonus section.