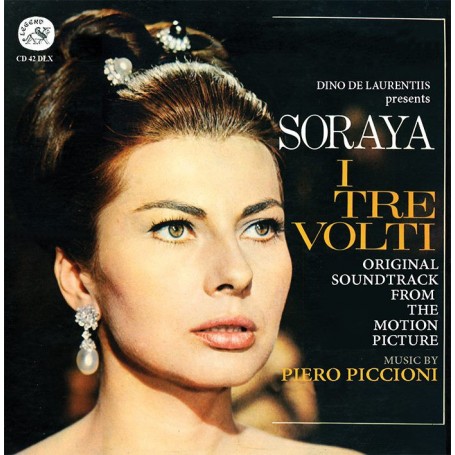 I TRE VOLTI, aka THE TREE FACES OF A WOMAN, 1965, is a film, made of three segments, directed by Michelangelo Antonioni, by Mauro Bolognini and by Franco Indovina. Sarring: Princess Soraya (three profiles: as herself, as Linda, as Mrs. Melville) Richard Harris, Aberto Sordi, Ivano Davoli, George Sartarelli, Piero Tosi, Ralph Serpe, Esmeralda Ruspoli, José Luis de Villalonga, Goffredo Alessandrini, Alberto Giubilo, Alfredo de Laurentiis, Dino de Laurentiis, Jean Rougeul and Renato Tagliani.
IL PROVINO (THE SCREEN TEST) - A reporter learns that a well known and admired person, belonging to the international aristocratic circle, is going to have a screen test. Risking his job, the reporter manages to convince his director to publish the news that the aspiring actress is Princess Soraya, the former wife of the Shah of Iran. Indeed, the princess is preparing to deal with the new experience, with the fears and anxieties of the novices.
GLI AMANTI FAMOSI (FAMOUS LOVERS) – after separation from the rich husband, Linda leads the mundane life together with Robert, a well-known writer. However, the love story comes to an end, and Linda wishes to return to live together with her husband. Meanwhile the husband, tired of waiting in vain, asked for the divorce. Linda and Robert are therefore forced to continue their life always pretending and hiding to the world the end of their love.
LATIN LOVER - A wealthy American lady in Rome disdains the company of a Latin lover that a travel agency has placed at her disposal. Upon departure, repented for her behavior that could seriously damage the young man, she makes sure to be photographed with him and so preserving the reputation of the servant knight.
For this World Premiere CD, total time 67:07, we used the master of the album of the time and additional material, 11 tracks, never before released, taken from the original recording session in mono. These cues never before heard add depth to this impressive score.
This OST is certainly one of the most elegant in the career of Maestro Piccioni, where romantic themes of extreme lyricism (often with the choir I Cantori Moderni di Alessandroni and the virtuous solo voice of Edda Dell'Orso, here reaching high extensions) are alternated with lounge music, such as Bossa, Samba, Blues and Jazz, that make a perfect background to the sophisticated environments in which the protagonists move. From the technical point of view, we have restored the original source by using a slight reverb and by lightening up the audio. The good job we have done it had the intention to give to the listener the feeling of being right in the recording studio with Piero Piccioni on the podium conducting the orchestra. An OST of high class that will add to the archive dedicated to the great soundtracks of the Cinema.