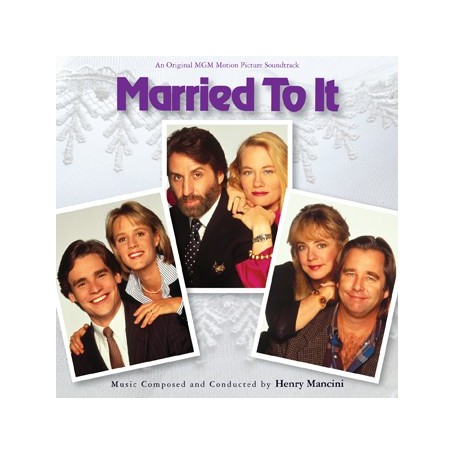 Three married couples with nothing in common… and everything to share. That was the poster tag line and it pretty well sums up this comedy/drama from director Arthur Hiller. Even though it came out in 1991, Married To It was very much a 1980s film in its attitudes and style. The movie is about three New York married couples who become friends (their children’s school being the unifying factor for two of the couples – the third couple’s wife is a teacher there). Each couple goes through trials and tribulations, which are handled dramatically and with humor, all leading up to a school pageant, where all plot strands are neatly tied up, while the students sing Joni Mitchell’s “The Circle Game.” The movie had a stellar cast, including Cybill Shepherd, Beau Bridges, Stockard Channing, Robert Sean Leonard, Ron Silver, and Mary Stuart Masterson.

For the score, director Hiller turned to the marvelous Henry Mancini. By this point in his career, Mancini was a legend, having scored an amazing number of great films, films to which his music added immeasurably – Breakfast At Tiffany’s, Touch Of Evil, Charade, Hatari, Arabesque, Two For The Road, Experiment In Terror, Days Of Wine and Roses, the Pink Panther series, The Great Race, Soldier In The Rain, Wait Until Dark, Victor/Victoria, and on and on.

For Married To It, which was one of his last films, Mancini was most likely asked to use Mitchell’s “The Circle Game” as the main and end title, given the importance Hiller places on it in the film. But the rest of the score is pure Mancini, but a Mancini with a good deal more synth work than was usual for him, although he still employs a full orchestra for several of the cues. Still, the melodies are glorious and the dramatic cues work beautifully – plus Mancini’s gorgeous orchestration and arrangement of “The Circle Game” is wonderful. Hiller would end up not using a lot of score – the cues in the film itself are quite short, but hearing them in their entirety is a joy and a delight.

For this CD, we used Mancini’s master mixes and we present every note he wrote for the film. For the CD’s end title, we used an alternate arrangement of “The Circle Game” since the film simply replays the main title. We also include several bonus tracks, which include yet another arrangement of “The Circle Game,” an alternate main title with music by Mancini, and two source cues that play under party scenes – both are classic Mancini tunes – “(I Love You And) Don’t You Forget It” and “Mr. Lucky.”