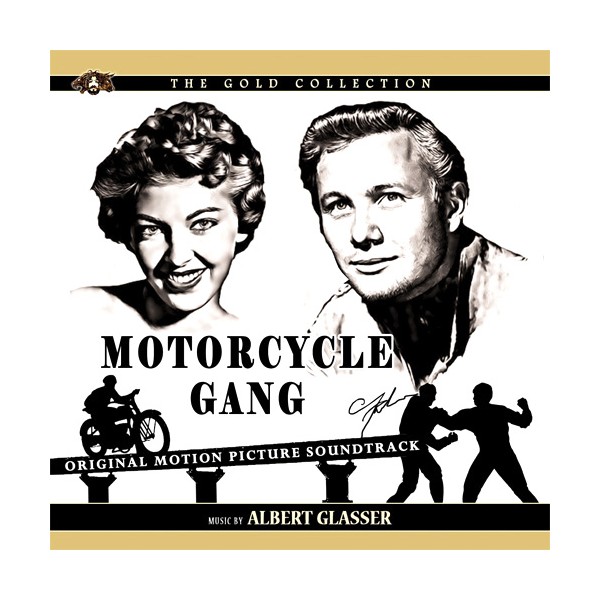 Kronos Records is proud to present a new title for our prestigious THE GOLD COLLECTION. MOTORCYCLE GANG is a 1957 film directed by Edward L. Cahn and based on a story by Lou Rusoff.

Nick, a troublemaker member of a motorcycle gang returns to town only to find his old pals have joined a supervised motorcycle club. Friction erupts between him and Randy, the new leader about this goody-goody setup, and about the charms of gang moll Terry. The film starred Anne Neyland as Terry, Steven Terrell as Randy and John Ashley in the role of Nick. Carl Switzer's (known as child actor in the role of Alfalfa) performance delivers some light hearts moments.

The music was written by prolific composer ALBERT GLASSER (THE MONSTER MAKER, THE CISKO KID RETURNS, THE GAY AMIGO, GRAN CANYON and VIKING WOMEN AND THE SEA SERPENT among others) who composed a big score fitting a class A Hollywood film of the Golden Age.

Glasser's score is an eclectic mixture of big band pieces for the more leisurely and toned down scenes and the big orchestra is left at handling the action, suspense the romance. Glasser was not only a world class composer, arranger and conductor but also had some of the finest musicians of his era at hand, easy said the drumming alone on this score is world class jazz swing going to rock and roll. This soundtrack really strikes a great balance between harmony, chill, suspense and big brass action!

This is the first time ever this score sees the light of day in any format and is limited to 300 copies worldwide, First come first served!

A true must for lovers of the Gold and Silver age of cinema and all Al Glasser aficionados!