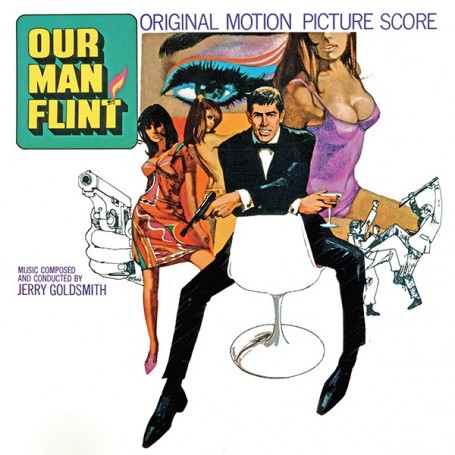 Two great sixties albums by Jerry Goldsmith make their debut on CD, mastered from the recently discovered original 20th Century-Fox stereo album session masters! Preserved in pristine condition in the vast UMG vaults, Our Man Flint and In Like Flint were short but exciting LPs that came out in 1966 & 1967 respectively. Both movies featured James Coburn as secret agent Derek Flint. Daniel Mann directs the former, Gordon Douglas directs the latter. Not to be confused with the Varese Sarabande release of soundtrack highlights, this Intrada CD offers both classic original albums exactly as Goldsmith recorded them, in crisp stereo with vivid orchestral color. Cool action, tuneful adventure and one of the composer's most famous themes all have their say. Included are authentic reproductions of both Bob Peak album jackets, classics in their own right, presented in our flipper-style CD cover. Choose your own favorite! These two albums have been amongst the most requested for CD release in our label's history. Wait no more, they're yours to spin! Jerry Goldsmith conducts both scores. Intrada Special Collection release available while quantities and interest remain!