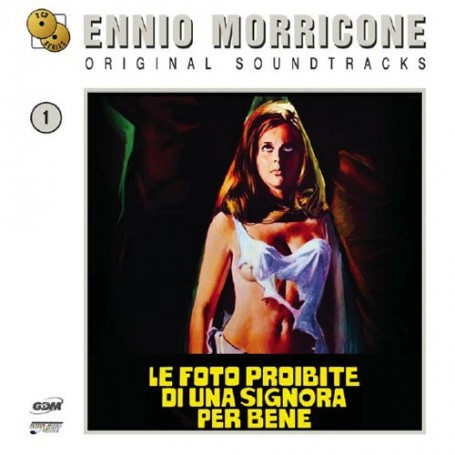 The film LE FOTO PROIBITE DI UNA SIGNORA PER BENE (1970) is a Giallo-Movie directed by Luciano Ercoli. In Italy a Giallo-Movie means a thriller movie. The name came from the mystery and crime pulp novels with yellow covers in post fascist Italy. Today Giallo movies are worldwide cult movies.
Ennio Morricone started to write music for Giallo movies in 1970. The music for LE FOTO PROIBITE DI UNA SIGNORA PER BENE is not an easy listening experience. The music is sometimes complex. Difficult to follow yet always interesting. The use of electronics in combination with orchestral instruments is done in a smart way. The electronic music is used as a single instrument of its own. Not as a replacement for strings or any other instrument. Note this score was never intended to become a soundtrack on CD or LP. It was composed to underscore the film and help it up to a higher level. It worked great in the film. About ten more Giallo movies were made with Morricone’s music. Of which L’UCCELLO DALLE PIUME DI CRISTALLO (The Bird with the Crystal Plumage) (also 1970) by Dario Argento is probably best known. However, fortunately, the fame of the composer made that almost everything he did has become available on CD.
The theme AMORE COME DOLORE is melodious and beautifully orchestrated. It is one of the few lovely themes on the CD. The theme comes back in QUELLE FOTO in another arrangement. It is in fact a three notes theme for piano. In the track DORICAMENTE we hear I CANTORI MODERNI DI ALESSANDRONI, a vocal group that worked with Ennio Morricone since 1964 until 1974. They did hundreds of films together. On the soundtrack is also the beautiful and recognisable voice of Edda Dell’Orso. Morricone used her voice not for songs but always as an instrument. Another cooperation for many years with Morricone. They worked recently together on the latest Giuseppe Tornatore film LA MIGLIORE OFFERTA (2012)
This CD is a remastered edition of the most complete edition, now with an improved sound quality. Enjoy!

IL RITORNO DI RINGO is the sequel of UNA PISTOLA PER RINGO, both directed by Duccio Tessari. They were released in 1965 with basically the same cast, starring Giuliano Gemma in the role of Ringo. (nicknamed ANGEL FACE)
For Morricone this was his fifth Western, or Spaghetti Western, if you like. The previous year he made name with Per un pugno di dollari (For a Fistful of Dollars), directed by Sergio Leone.
The score for the Western is in the typical style of Morricone which made him famous and which has become standard for Westerns ever since. His style for Western movies has been copied by many other composers but never surpassed. The orchestration in Morricone’s music is just as important as the composition. In the score there are some atonal tracks. Apart from this there are also very fine melodic tracks to enjoy.
A very nice piece is BARNABA’S BAMBA. Played on 2 guitars as background and a solo harp played by Anna Palomba for the theme. A very original orchestration. The track IL FUNERALE has something you might recognize. The introduction is the same as on the single IL SILENZIO by Michele Lacerenza on trumpet.
The very peculiar tracks are 9 and 10. The story is told including dialogues, narration, sound effects and songs. These tracks are originally on the very rare album ARC SA 7 from 1965 issued in Italy. Very interesting is also the track L’INCONTRO CON LA FIGLIA, which was originally composed for the John Huston film THE BIBLE (1964) as part of LA CREAZIONE. The track, as all other tracks for The Bible, were recorded and conducted by Franco Ferrara. According to Maestro Morricone: the best conductor ever.
The music has been remastered for this CD and the result is terrific. The music sounds as never before.