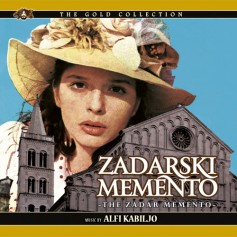 Kronos Records is proud to present the soundtrack to the 1984 Joakim Marusic WWII film ZADARSKI MEMENTO (The Zadar Memento).

The painful challenges experienced in the life of a farmer from Zadar, Croatia, in the years from World War I to World War II. At the end of World War I, a poor village boy Krsevan commits murder in self-defense and to save his life he fled to Zadar, which is annexed to Italy. As an immigrant, he has been blackmailed by Italian authorities. His poverty and ignorance are the main reason for becoming an Italian spy. This film is a true gem, it starred Lazar Ristovski, Zdravka Krstulovic, Mustafa Nadarevic and Mira Furlan. The film is not as well known as it would deserve to be however has a cult status with those who know it.

The music for the film was penned by award winning composer ALFI KABILJO, with whom we have had the immense privilege of working on BAHNOVIC STRAHINJA (THE FALCON), NIKOLA TESLA and OCCUPATION IN 26 PICTURES. Kabiljo's score is a highly dramantic one, the likes we are expected to have from Maestro Kabiljo, whose stream of brilliant work is everflowing. Along the gorgeous score the CD also features the song "Zadarska Balada" written by Alfi Kabiljo and sung by Djani Marsan

A real gem that you cannot afford to miss! Order now!