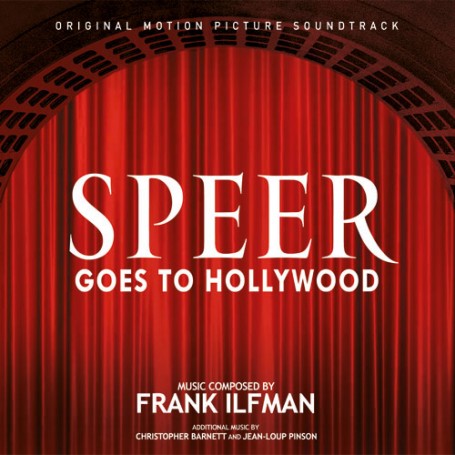 KRONOS RECORDS is once again very happy and thrilled to work with our friend Frank Ilfman (Big Bad Wolves, Rory's Way) to release the emotionally-charged music for Vanessa Lapa's Docu-film SPEER GOES TO HOLLYWOOD. Chronicling the story of high ranking Nazi Albert Steer. As Reichsminister of Munitions, Speer was responsible for 12 million slave labourers. And yet, even now, he has the reputation of being "the good Nazi" - a myth he carefully constructed himself. Speer Goes to Hollywood meets its protagonist in 1971, while Speer was working on a screenplay for Paramount Pictures, based on his best-selling wartime memoir "Inside the Third Reich". Based on months of audio cassettes, recorded by screenwriter Andrew Birkin, it features Speer's callous attempt to whitewash his past in a feature film. The audio narrative is supplemented by rare archival footage, taken before and during World War II and later, during Speer's retirement as a semi-reclusive country gentleman.

The music Frank Ilfman wrote for this feature film is a top-notch full-bodied orchestral composition that perfectly underscores the drama of post World War II. It is subtle and sneaks in on you infiltrating your emotions with its genial flow, form, mood change and cadence. This is a very personal soundtrack. Tracks like "Speer The TV Star" and "The Nüremberg Testimonies" are somber, melancholic piece for piano with a subtle backing string ensemble that are truly haunting and mesmerizing. A very unique and beautiful soundtrack that cannot not move you and makes you want to watch the film with an urgency. We already knew that Frank Ilfman was one of the up and coming most talented composers and this soundtrack strongly reaffirms this conviction.

Composer Frank Ilfman offers us some insight in the CD booklet.