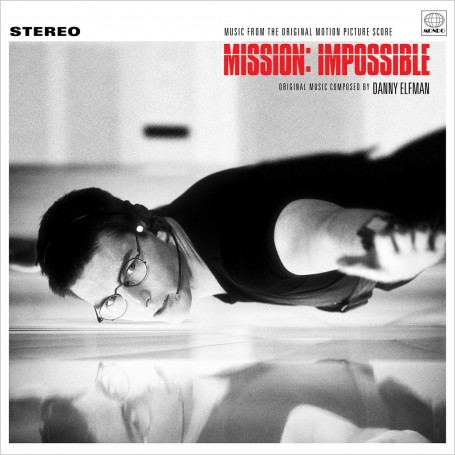 Mondo is proud to present the premiere vinyl release of Danny Elfman's incredible score to the film that started one of cinema's most celebrated franchises- MISSION: IMPOSSIBLE (1996)

The Tom Cruise helmed, auteur driven, action spy series has been an American cinema staple for over twenty years. Nearly every film in the series features a new filmmaker behind the camera, just as nearly every film allows a different composer to take on scoring duties. Before that became the expected standard, however, the first MISSION: IMPOSSIBLE film was tasked with elevating the pulp television classic to summer popcorn flick. Brian DePalma's sleek, smooth and masterful first entry made waves with its approach to past characters from the series, but was not so carefree with its musical legacy, bringing on composer Danny Elfman to helm the score. Stepping out of the darkness of his iconic Tim Burton collaborations and into more lighthearted territory with his adaptation of Lalo Schffrin's earworm theme song and other motifs, this score is one of the best of Elfman's career. MISSION: IMPOSSIBLE still proves to be a high water mark that future composers have had to live up to with each subsequent chapter of this classic blockbuster.