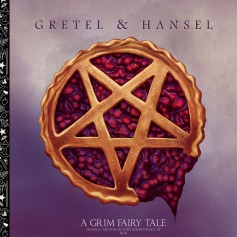 Waxwork Records is proud to present GRETEL & HANSEL Original Motion Picture Soundtrack by ROB. Directed by Osgood Perkins (The Blackcoat’s Daughter, I Am The Pretty Thing That Lives in the House) and starring Sophia Lillis (It Chapters 1 and 2), Gretel & Hansel is a 2020 American Dark Fantasy Horror Film based on the German folklore tale Hansel and Gretel by The Brothers Grimm. The story is set a long time ago in a distant fairy tale countryside and focuses on a young girl who leads her little brother into a dark wood in desperate search of food and work, only to stumble upon a nexus of terrifying evil. Gretel & Hansel offers a terrifying untold story to the classic fairytale.

The soundtrack by Paris-based composer ROB (Revenge, Horns) is a haunting and hypnotic electronic soundscape that features Moog synthesizers and a mellotron. There was no orchestra involved in the creating process, as ROB played all instruments himself, except from additional cellos by his recording partner Moritz Reich.

“The idea was to avoid the traditional musical schemes used in tales such as the use of symphonic orchestras, and therefore find a more original and specific color, using both warm and synthetic sounds with the predominance of the mellotron and the Moog synths.

I find it essential to create melodies that we can sing or whistle (themes, ritournelle...), as, in horror cinema, it is usually the opposite, where the music rather has a tendency toward structure and abstraction. For this project, which is a film about kids, it seemed important to have that.”