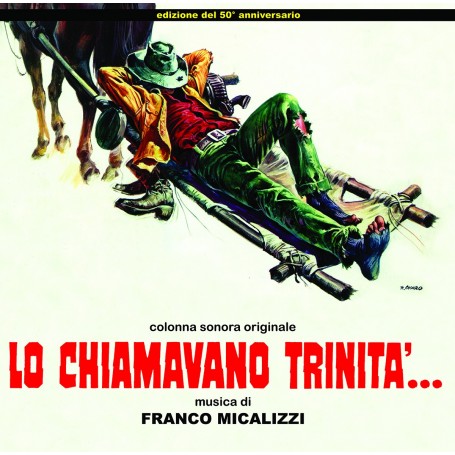 A catalogue such as Beat Records’ one, with its roots in the 60s may have a difficult logistic. I still remember when passing through Viale Medaglie D’Oro with my mother Luciana who was used to point me a building’s apartment located in the corner with Via Elio Donato. A bit moved she was used to tell me that Beat was born in those four walls, a small house with a beautiful terrace full of vases. Since that time Beat Records changed many times head quarter up to moving to Via Filippo Nicolai 16 from the late 80s up to nowadays. Such a company catalogue, sensibly grown during 55 years of life, was always needing more space and so, recently, we decided to find a new place where to agglomerate various storages spread through Rome. What does all the above things have to do with They Call Him Trinity? A lot, since while we were archiving some tapes in order to prepare our forthcoming transfer, we found them. Six 24tracks master tapes belonging to the original recording session. Priceless material stored in crates in a corner, still there to be archived since a preceding moving. A brief e-mail exchange with our co-publishers of Carosello, a meeting in Milan with Adriana Branchini and Dario Giovannini, to get their support and we proceeded with this recovery project. And we are close to end of the year, as Cirano De Bergerac was used to say, at the end of the rhyme. The first release of this score is dated January 1971, this 2021 December the 50th year will expire, no better chance to sanctify the party! With all due precautions we transferred the tapes and organized a remastering session in Trafalgar studios, Enrico De Gemini experience, responsible of West catalogue, guided the recovery and restoration. Surprise weren’t late, the recording was perfect, the crisp sound could be remastered in a brilliant stereo. One of the most beloved Western soundtrack of all times is going to live a second youth with a great dynamic, not saturated, that lets us enjoy this delicious dessert, able to feel on our tongue the various ingredients and still tasting the mixed amazing resulting effect. And there is a lot of unreleased material, an amazing deguello version featuring a trumpet instead of the flugelhorn, a beautiful alternate version of Di Fronte Ai Killers, of Un Cowboy e Due Ragazze and a lot of unreleased takes of Trinity’s Valley in which Franco De Gemini harmonica is prominent. We have our 50th anniversary edition on a 180 grams colored vinyl, mastering by Enrico De Gemini, graphic Layout by Daniele De Gemini.