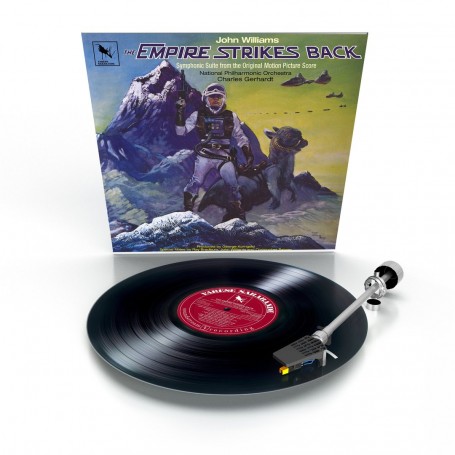 Originally released to supplement – not compete with – the 2-LP Motion Picture Soundtrack of STAR WARS: THE EMPIRE STRIKES BACK, this 1-LP release, skillfully combines a “Symphonic Suite” that John Williams created for concert performance with new arrangements of other cues from the film score. This fantastic, long out of print album comes in a gatefold jacket with the original iconic Star Wars paintings by William Stout, images of John Williams, and notes from author Ray Bradbury, composer and critic, Christopher Palmer, and from the maestro himself. Out of print since original pressing in 1980. 180 gm black vinyl pressing.

"I was delighted when Charles Gerhardt asked me if he could record the suite from THE EMPIRE STRIKES BACK, since I am a great fan of his recorded performances. Moreover, I was so pleased with his recordings of the original STAR WARS and CLOSE ENCOUNTERS scores, which he made in association with producer George Korngold, that I have looked forward to this LP with special anticipation.

The Suite, which I had specially written and adapted for concert performance […] had been skillfully augmented with other music from the film to form a unified whole. A great orchestra and Gerhardt’s opulent sound and dramatic phrasing combine to make a fine addition to a rapidly growing list of great recordings of film music." – JOHN WILLIAMS