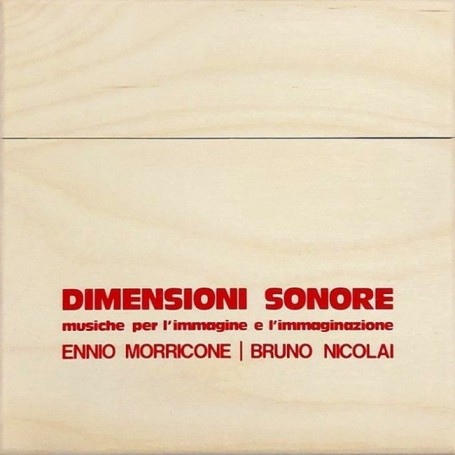 By buying this product you can collect up to 9 points. Your cart will total 9 points that can be converted into a voucher of 2,25 €.

A genre defying marvel, Dialogo’s first ever standalone CDs reissue of Ennio Morricone and Bruno Nicolai’s masterstroke, Dimensioni Sonore, is presented as 10 CDs, accompanied by an 80 page booklet, all housed in a beautiful wooden box, strictly limited to an edition of 280 copies. A perfect counterpoint to their astounding vinyl box set, reissuing Ennio Morricone and Bruno Nicolai’s legendary 10 LP box set issued last year, Dialogo returns with the first ever standalone CD release of “Dimensioni sonore”. Just as striking as the vinyl edition, this is among the most ambitious and important bodies of Italian Library music ever to emerge. An absolutely astounding accomplishment, mid-way through 2020 Dialogo announced the first ever vinyl reissue of Ennio Morricone and Bruno Nicolai’s overwhelming ambitious 10 LP box set, Dimensioni sonore. Long regarded as one of the great, towering holy grails of Italian library music, it sold out almost immediately. Now Dialogo is back with the first ever standalone CD release of this mind-blowing body of work, presented across 10 CDs and accompanied by an 80 page booklet, all housed in a beautiful wooden box, it’s strictly limited to an edition of 280 copies and is sure to fly out the door as fast as its predecessor. Among the most important figures in 20th century Italian music, Ennio Morricone and Bruno Nicolai each forged distinct and unexpected creative paths that were entirely tuned to the eras through which they worked; radical and forward thinking composers, who activated vast new worlds of possibility via the mediums of film and television. Morricone has long held legendary status for his soundtrack and library music work, as well as his explicitly avant-garde and experimental endeavors within the seminal collective, Gruppo di Improvvisazione Nuova Consonanza, but Dimensioni Sonore - a sprawling body of recordings originally issued by RCA in 1972 - holds equal distinction as a historically prescient illumination into the slightly lesser known efforts of Nicolai, and the groundbreaking importance of his work. Regular collaborators over the course of their respective careers, Morricone and Nicolai met as students during the early 1950s at the Conservatorio di Santa Cecilia in Rome, fostering a friendship that would yield, from the mid 1960s on, hundreds of albums that bear both of their names, in one role or another. Each of these is incredible and worthy of note, but none is as astounding, distinct, or ambitious as Dimensioni Sonore, regarded by many as the crown jewel in RCA’s legendary library music series, Catalogo di Musiche per Sonorizzazioni. Almost entirely distinct in scale and content, Dimensioni Sonore towers in the history of library music; the intriguing and idiosyncratic realm that, particularly in Italy, offered a vehicle for a great many of the country’s most radical composers to stretch their talents into wild and unknown territories, allowing them to infiltrate the public consciousness via the mediums of television and film. Gathering 103 works - 5 CDs ascribed to works by Morricone and 5 to those of Nicolai - little information exists of the musicians involved with recording Dimensioni Sonore, but there has long been speculation that the legendary Gruppo di Improvvisazione Nuova Consonanza lingers just out of sight; unsurprising given how wild and masterful it is. Like nearly all library music, the works of Dimensioni Sonore were not composed with any particular film or thematic association in mind, rather to be selected by filmmakers at a later date. This gave Morricone and Nicolai a remarkable amount of freedom to follow their creative intuition into strikingly uncharted realms. Deploying a starling range of acoustic and electronic instrumentation and techniques, and conceived in sequential order, across their new presentation as 10 CDs, Morricone and Nicolai - working far more like avant-garde composers than the creators of film scores - set out to create a body of expressive and dynamic work which explored constant timbric exploitations and multiform musical parameters, and their possibilities for utilization, titling each composition with no direct relation to its form, intentionally leaving the meaning entirely to the listener’s mind. While too varied to describe in any detail, the organisations of sound encountered across Dimensioni Sonore are incredibly distinct within the music of its moments, and arguably any before or since. Sheets of pointillistic ambience bristle with details of synthetic and organic tones and textures, generating a fields of abstraction that could be mistaken for any number of avant-garde and experimental gestures of the ‘60s and ‘70s, were it not for the unifying, cracking rhythm section that drives it forward and pushes into entirely unexpected realms, which gave Sergio Leone, Pier Paolo Pasolini, Elio Petri, Gillo Pontecorvo, all Giuliano Montaldo all plenty to explore in their original liner notes for the release.