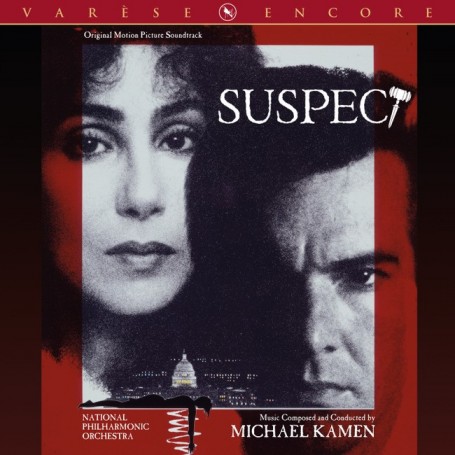 Michael Kamen’s nail-biting and suspenseful score for Suspect (1987) has been out of print and unavailable for over 20 years! This is classic Kamen from the early days, recorded with London’s acclaimed National Philharmonic Orchestra (a favorite of Jerry Goldsmith’s). We are so happy to present this score that will be new to so many!

British filmmaker Peter Yates directs Suspect, a suspenseful courtroom drama set in Washington, D.C. After a Supreme Court justice commits suicide and a Justice Department secretary is found dead, a deaf-mute homeless veteran, Carl Wayne Anderson (Liam Neeson), is the suspected killer. Lonely yet dedicated public defender Kathleen Riley (Cher) is assigned to the case to represent Anderson. Suave lobbyist Eddie Sanger (Dennis Quaid) is on the jury, but he starts his own investigation by finding clues that prove Anderson's innocence. He shares his information with Kathleen, even though they could get arrested for talking about the case. Eventually, they develop a romance and reveal a conspiracy that leads to a twist ending. The mysterious conclusion involves a final courtroom scene presided over by Judge Matthew Helms (played by veteran character actor John Mahoney, who would go on to co-star on the sitcom Frasier).