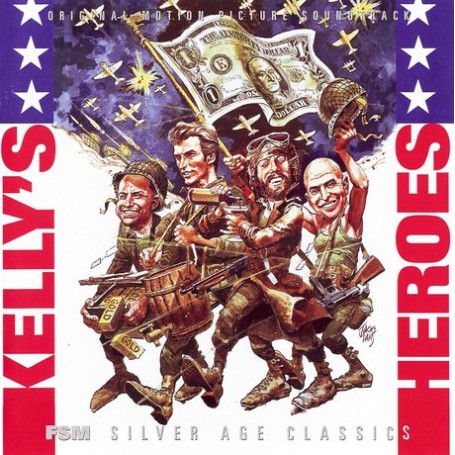 By buying this product you can collect up to 6 points. Your cart will total 6 points that can be converted into a voucher of 1,50 €.

Kelly's Heroes was scored by Lalo Schifrin, whose other Eastwood movies include Coogan's Bluff, The Beguiled, Joe Kidd and the Dirty Harry films. Schifrin responded to the film's shifts in tone with an eclectic score encompassing straight-ahead action, pleasantly anachronistic source music, and a jazzy, whistling march for the film's titular heroes.

Three Schifrin songs are included: "Burning Bridges" (performed by The Mike Curb Congregation), "All For the Love of Sunshine" (a country/western song performed by Hank Williams Jr.), and the never-before-heard French cocktail number "Si Tu Me Dis" (performed by Monique Aldebert).

For score fans, it is Schifrin's expansive underscore that is the revelation, most of which has never been released, as the original LP was largely a re-recording. Notable are the propulsive "Tiger Tank" and the climactic spaghetti western spoof, "Quick Draw Kelly." Many of the underscore cues were not included in the film and have never been heard—chief among them Schifrin's original main and end titles, featuring the whistling theme and replaced in the film by "Burning Bridges."

Kelly's Heroes was released on CD by Chapter III, but that album merely contained the LP tracks. This premiere release of the actual Kelly's Heroes underscore includes the original soundtrack—newly remixed from the 1/2" stereo masters—with the LP re-recordings as bonus tracks. Liner notes by Jeff Bond and Lukas Kendall include Schifrin's comments on the project.