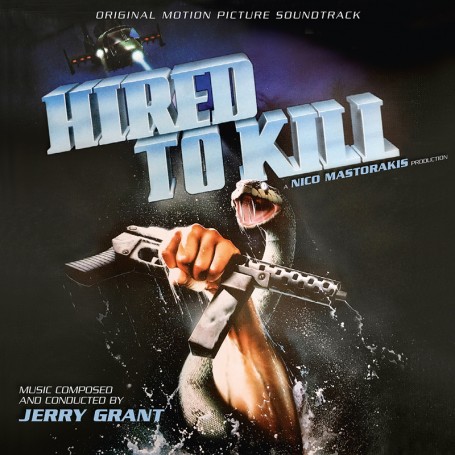 Quartet Records, in collaboration with MovieScore Media, releases the exciting action music of HIRED TO KILL (1990) by Jerry Grant for the film co-written, directed and produced by Nico Mastorakis, HIRED TO KILL is a story of action and suspense as a fashion photographer and his group of seven models travel to a South American island fortress to do a fashion shoot. In reality, the photographer is a mercenary who has been hired to free an imprisoned rebel leader with the models in tow. The film’s cast include Brian Thompson as mercenary Frank Ryan, Oliver Reed as the dictator Michael Bartos, George Kennedy as the leader of the operation, Thomas, and José Ferrer as the rebel leader Rallis.

HIRED TO KILL it’s an excellent orchestral score writing in an era where action scores tended to move towards the purely electronic domain not necessarily because of artistic reasons, but due to cost cutting. The music by Jerry Grant recalls the best moments of his namesake, Jerry Goldsmith, with an exciting blend of ostinato-based action scoring mixed with electronics. Powerful drum kits, suspenseful textures and pulsating rhythms accentuate the heart-pounding orchestral playing with occasional local color added for the globetrotting aspect of the story.

Born in 1936, Jerry Grant began his career as a jazz/rock studio musician in his hometown of Detroit, witnessing the rise of Motown Records up close. Besides HIRED TO KILL, his film score credits include movies such as NINJA ACADEMY (1988), BLOODSTONE (1988), DARKROOM (1988), WORLD OF VALOR (1992), THE NAKED TRUTH (1992), and IN THE COLD OF THE NIGHT (1990). His TV series composing credits include episode scores and other contributions to the music of QUANTUM LEAP, HUNTER, MAGNUM P.I., THE A-TEAM, HARDCASTLE AND McCORMICK, RIPTIDE, WISEGUY, and children-oriented programming such as THE SECRET WORLD OF ALEX MACK, BONKERS, and DARKWING DUCK.