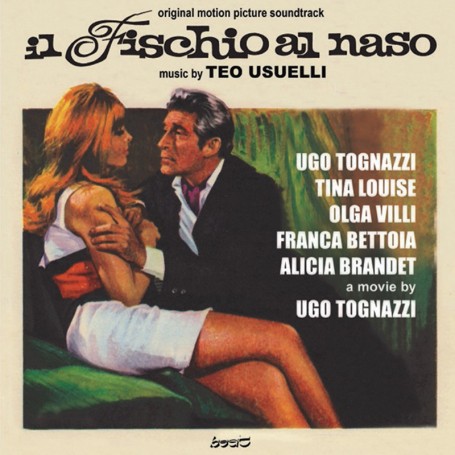 IL FISCHIO AL NASO (aka “The Seventh Floor “) is a dramatic movie directed in 1967 by Ugo Tognazzi. Cast: Ugo Tognazzi, Tina Louise, Olga Villi, Alicia Brandet, Franca Bettoja, Gigi Ballista, Gildo Tognazzi, Marco Ferreri, Riccardo Garrone, Alessandro Quasimodo, Max Turilli, Federico Boido, Cristina D'Avanzo, Cesare Gelli, Janine Reynaud, Luigi Leoni, Rossella Bergamonti, Renato Nicolai, Giulio Scarnicci, Renzo Tarabusi, George Wallis, Genny Folchi, Ermelinda De Felice, Mario De Simone, Alessandro Da Venezia, Anna Maria Aveta and Federico Valli. Industrialist Giuseppe Inzerna, afflicted by an annoying hissing sound in his nasal passageway, is employed at the very modern Salus Bank and subjected to endless examinations, analyzations and treatments. The whistle in his nose eventually goes away, but other symptoms appear in its place. Inzerna refuses to consider himself sick, yet is afraid to go home, despite the advice of the doctors who employ various excuses to place him on higher floors as his illnesses multiply, each floor representing the next stage of the developing malady. Inzerna becomes increasingly alone and defenseless against his family, who plot and scheme behind his back until the tragic ending. Teo Usuelli (13 December 1920, Reggio Emilia - 13 April 2009, Rome) was a prolific composer of about forty soundtracks between 1950 and 1976 as well as important songs in the late Fifties including "Meravigliose labbra," performed in 1959 by Johnny Dorelli. He was also an important researcher in the field of medieval and Renaissance music (transcribing popular and choral songs in a modern key) and teacher of composition at the Conservatories of Bologna, L'Aquila and Trento. In 1959, he met director Marco Ferreri, with whom he made an important artistic partnership by composing the music for famous films such as “L’ape regina” “La donna scimmia,” “Marcia nuziale” and “Dillinger è morto.” Here we present, for the first time on CD (total duration 44:21), the M° Usuelli’s soundtrack for "Il fischio al naso," assembled using the mono master tapes of the recording session, archived at Universal Music Publishing Ricordi srl. At the time, the Italian RCA released only a single (PM 3401) containing "La conta," with lyrics by Tognazzi himself, performed by the beat band Le pecore nere, which can be heard in the opening credits and is reprised for the Finale. The author reprises the main theme with fabulous baroque performances for orchestra, sometimes adding beat rhythms with electric guitars and a version with polyphonic choir alternated with lounge music. Usuelli composed a poignant requiem for the love scenes between the protagonist Giuseppe and his lover Giovanna which the composer also arranges in a waltz version with a beat flavor for the party scene organized by the patients of the clinic. In one sequence, the protagonist ends up on a floor where—among the bizarre patients—is a young Spanish man who sings flamenco and plays the guitar. A rescue and preservation in honor of Maestro Teo Usuelli, one of the great names of Italian Film Music.