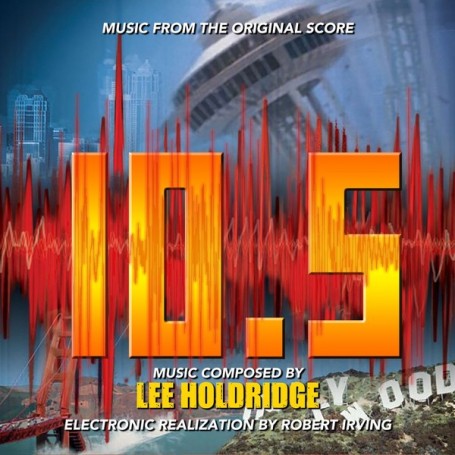 10.5 was a 2004 NBC television mini-series directed by John Lafia (CHILD’S PLAY 2, MAN’S BEST FRIEND, THE RATS, episodes of BABYLON 5, FREDDIE’S NIGHTMARES, THE DEAD ZONE), who is also co-credited with the screenplay along with Christopher Canaan (WALKER TEXAS RANGER, BRIDGE OF TIME) and Ronnie Christensen (PASSENGERS, DARK RIDE, INCARNATE). The mini-series was acclaimed for its visual effects, and deservedly so. From the toppling of Seattle’s Space Needle, a passenger train swallowed up by a giant crack in the earth, and the Golden Gate Bridge collapse to the film’s catastrophic 10.5 earthquake which separates a large portion of California’s southwestern coast to float off into the Pacific.

By the time he composed 10.5 in 2004, Lee Holdridge had 34 years of experience composing music for films and television. Holdridge’s experience scoring for television, in particular, had given him a reputation as a competent and dependable composer. It was his association with NBC television that brought him in to score 10.5. Holdridge had scored a handful of dramatic mini-series prior to 10.5, mostly historical subjects, but his 1999 NBC mini-series ATOMIC TRAIN, an action thriller about a disposal company transporting an atomic bomb who conceals the device on a freight train to save money, gave him a chance to flex his action movie chops.

Holdridge had been primarily an orchestral composer when it came to film scoring and higher-budgeted TV movies and mini-series, but 10.5 didn’t have the budget for a fully orchestral score. This was the era where television production companies didn’t have the kind of budgets that permitted full orchestras, so the bulk of 10.5’s score was recorded via MIDI. But Holdridge did manage to bring in a few live instruments to sweeten an otherwise electronic score. Most of the score was performed recording digital instruments into MIDI, allowing Holdridge and Robert Irving to manipulate the sounds and give the disaster music its proportional sonic size. The electronic foundation of 10.5’s score benefits from Holdridge’s experience as an orchestral composer and conductor when it came to realizing an authentic orchestral sound via digital means.

Dragon’s Domain Records is excited to bring 10.5 to compact disc for the first time, mastered by James Nelson at Digital Outland under the composer’s supervision. The booklet includes exclusive liner notes written by author Randall Larson with the participation of the composer. 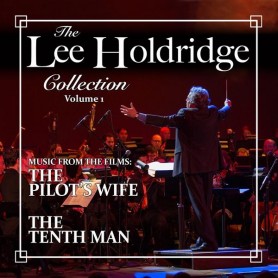