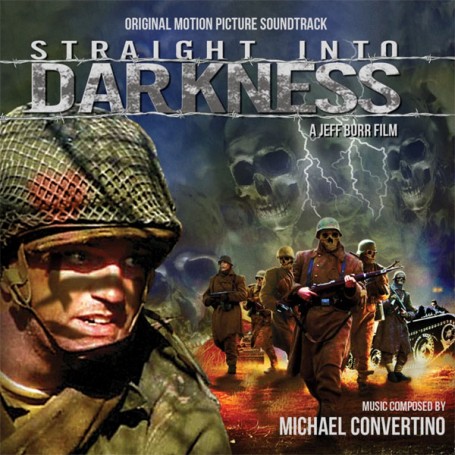 Set shortly after the Battle Of The Bulge, during the final days of World War II, STRAIGHT INTO DARKNESS tells the story of two American soldiers who desert their platoon. Losey (Francis) is thoughtful and sensitive while Deming (MacDonald) is the opposite – hateful and vicious. After being captured by the Military Police, the pair manage to escape after their prison transport hits a landmine. Deming holds Losey at gunpoint as they make their way across the battlefield, hiding from their own troops and trying to evade the remaining German military forces. While taking shelter in a bombed out mill, they find themselves confronted by a group of young orphans cared for two freedom fighters, Deacon (Warner) and Maria (Thorson), who have trained the children to be ruthless guerrilla soldiers in order to survive. When a Nazi Panzer battalion arrives and traps them all inside the mill, they are all forced to make a desperate stand, offering Losey and Deacon another chance to redeem themselves.

The score for STRAIGHT INTO DARKNESS is multifaceted and multi-dimensional. At times tranquil, subliminal, tense, featuring patterns of tonality and atonality, moments of frivolity, and elements of percussive gamelan and Gregorian-esque plainchant for both male and female singers. Convertino created the score at his studio in Venice, using his electronic music array as well as bringing in a small group of live players and a pair of singers for his choral material.

Michael Convertino was born Michael Hurt circa 1953 in New York City, educated at Yale, played in a jazz band, and studied music at the Paris Conservatoire. Back in the US he was a member of The Innocents, a briefly successful New Wave band. Convertino moved into scoring films with Tim Burton’s original live-action short film version of FRANKENWEENIE, co-composing with David Newman in 1984. The composer gained significant acclaim by scoring CHILDREN OF A LESSER GOD (1986); while he is known to be very selective in his projects—with 35 film scoring credits to date—he is known for the dramatic, immersive soundscapes he brings to films as diverse as THE HIDDEN (1987), BULL DURHAM (1988), THE SANTA CLAUSE (1994), THINGS TO DO IN DENVER WHEN YOU'RE DEAD (1995), BED OF ROSES (1996), MOTHER NIGHT (1996, also a WW2 film), and WE DON’T LIVE HERE ANYMORE (2004).

Previously released on compact disc by Citadel Records as a limited edition in 2006, Dragon’s Domain Records is excited to bring STRAIGHT INTO DARKNESS back to the marketplace. The music has been mastered by James Nelson at Digital Outland, with liner notes written by author Randall Larson, including the participation of writer/director Jeff Burr and composer Michael Convertino.