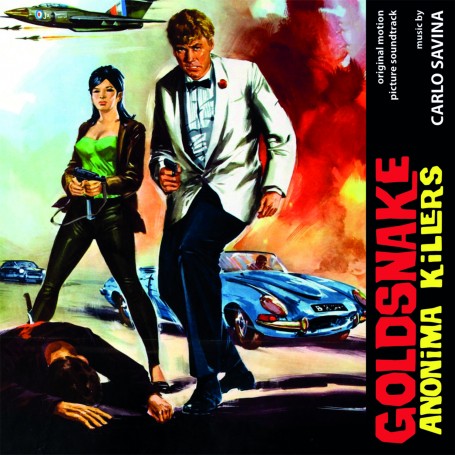 Digitmovies is pleased to release, for the first time on CD, the OST by Carlo Savina for the spy film “Suicide Mission to Singapore” (original title “Goldsnake Anonima Killers”).

For this OST, Carlo Savina composed lounge background music, at times dominated by a mysterious Asian vibe (Track 2) and by sophisticated jazzy vibes. "Gold Snake" (Tracks 1 and 17), the main score, is interpreted by the fabulous voice of Iva Zanicchi, written for a symphony orchestra, and accompanied by the New Orlandi choir (the piece was recorded on 45 RIFI RFN NP 16141). The leitmotif is reprised in a shake version (Tr.3) and a slow danceable version (Tr.10). The well-known actress Yoko Tani, the film’s protagonist, performs the romantic piece "Crazy" (Tr.7), which is also recorded in an instrumental version (Tr.4, Tr.11). The spy aspect of the plot is emphasized by suspense and action music (Tr.8, Tr.9, Tr.12, Tr.13, Tr.15). For this CD the mono master tapes of the recording session were used.

US secret agent Kurt Jackson is sent to Singapore to track down professor Wang Li and his son, who have both fled China. The shady dealer Chang Tu and his gang are after Wang Li because they want to get a hold of the atomic formula he has discovered, which can be used to build small bombs. A clash between the agent and the criminal organization is inevitable. Wang Li’s son is killed which allows the criminals to take possession of the first part of the formula, but the scientist flees and hides out among Buddhist monks at a temple on the sacred island of Pantgor. The decisive duel between opposing forces takes place inside the sacred walls. Kurt finally manages to beat his opponents and take possession of the sought-after formula. At this point, Annie Wong, an attractive Chinese girl who had assumed the role of Kurt’s guardian angel, turns out to be an obstacle to Kurt’s mission. He is forced to get rid of her before returning triumphantly to New York.