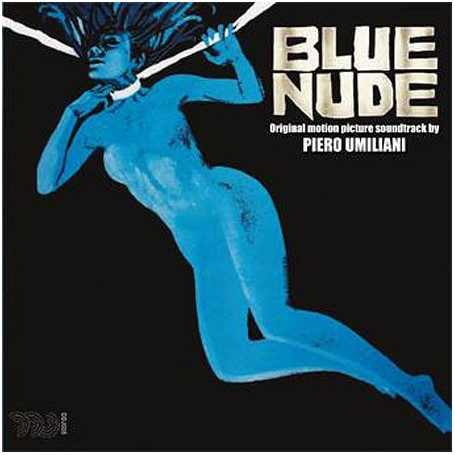 To describe Piero Umiliani’s music, we have a word that often comes to mind and which the composer used to entitle one of his most beautiful cues: tensione (tension).
Tension, depending on the circumstance to which we apply it, is a term with many meanings but which always expresses a condition of intense participation, of intellectual strife, of energy exerted in the pursuit of a goal.
One of his lesser-known works, Blue Nude (1977) is a musically-rich effort that illustrates the artistic tension of the Maestro, always looking for new atmospheres and solutions. The cues recorded during these sessions really are hidden gems. Director Luigi Scattini, here in his last effort of a long cinematic career, wrote in his blog that “this score is one of the finest in the jazz scene, and it’s really a pity that it’s virtually impossible to find these days.” Now it’s no longer impossible to find.

Innovator and anticipator as usual, the composer employed a modern, evocative jazz style that highlights a different lead instrument each time. Up to now, the only partial release of this music was on the album “Due temi con variazioni,” of which Umiliani produced about 300 copies with the label Sound Work Shop (SWS 119) in 1978. Not destined for commercial release, it featured a few cues and outtakes from sessions recorded during the Blue Nude period.
The jazz of Blue Nude shares the gritty backstreets of New York with some funk and country digressions, antithetical genres that the Maestro proficiently joins into the same concept. A sample of this unique contamination are the two cues “Blue Nude” and “Life Goes On,” sung by the Rome-adopted New York vocalist Charles William Cannon.
Due to the bankruptcy of the production company Euro International, the movie was released in only a few theaters in Italy and was pulled shortly thereafter, a circumstance that contributed to the mystery that still surrounds the film today.
Finally, after more than thirty years, the score for Blue Nude is finally released thanks to Beat Records. It’s another important chapter in the art of Piero Umiliani, the most versatile of our composers and the one who is known by fans everywhere simply as “The Maestro.” (Francesco Argento).