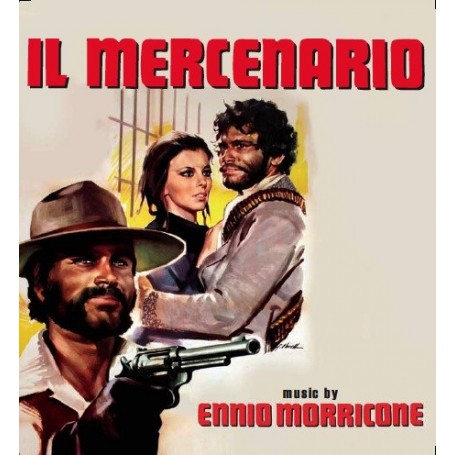 IL MERCENARIO aka THE MERCENARY – A PROFESSIONAL GUN. A western movie directed in 1968 by Sergio Corbucci. Written by Giorgio Arlorio, Adriano Bolzoni, Sergio Corbucci, Franco Solinas, Sergio Spina, Luciano Vincenzoni; produced by Alberto Grimaldi for Pea; music score by Ennio Morricone; photography by Alejandro Ullon; editing by Eugenio Alabiso; starring Franco Nero, Tony Musante, Jack Palance, Giovanna Ralli, Franco Giacobini, Eduardo Fajardo, Franco Ressel, Raf Baldassarre, Álvaro de Luna, José Canalejas, Ugo Adinolfi. The story takes place during the Mexican revolution. Paco (Tony Musante), a peon, rebels against his boss, owner of the mine for which he works. From there, Paco became the leader of the revolution. To help his revolution, and fight the regular troops, he hires a mercenary, Serghei Kowalski (Franco Nero), a Polish. Columba (Giovanna Ralli) joins with the two of them and this young woman and Paco fall in love. After a series of adventures, Paco kills in a duel his enemy Ricciolo (Jack Palance), but then is captured by the military along with Kowalski and the two are sentenced to death. Before the execution, Columba saves them. At the end of the movie Kowalski resumes his mercenary wandering, while Paco continues to fight for the freedom of his country. Ennio Morricone composed an OST that alternates epic music of revolutionary kind with pieces of Mexican folklore: as Mariachi and Bamba. Morricone puts the whistle in the score, which creates an atmosphere of mystery mixed with pain, often enhanced by the sound effects of a machine gun. In 2004, director Quentin Tarantino effectively used the song The Arena in his film KILL BILL Vol. 2 in the sequence where the murderous Bride, buried alive, manages to escape her death. Digitally restored and remastered, the recordings on this CD comes from the master tapes in stereo, assembled for the original album. To date the master tapes of the recording session are not yet been found.