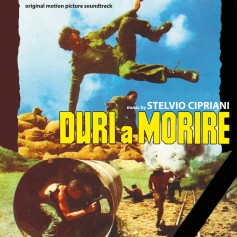 We are pleased to release the complete edition OST by Stelvio Cipriani for the action film “Tough to Kill” (“Duri a morire”) for the absolute first time on CD.

SOUNDTRACK
Stelvio Cipriani composed an OST where funk music, which was typical at the time, blends with Latin American sounds. The wild dance song in the opening credits (Tr.1) is reprised in a fast version (Tr.5, Tr.11), a slow version with South American rhythms (Tr.3, Tr.13)  and then contrasted with sad and dramatic strings (Tr.2, Tr.17). Electronic and rhythmic suspense pieces are perfect to describe the hidden dangers waiting for the protagonists of the story (Tr.4, Tr.12, Tr.15). There is no lack of piano pieces performed by the composer (Tr.6, Tr.10), Greek folk music (Tr.7) and military themes (Tr.8, Tr.14). For this CD (total running time 42:31min), the restored stereo master tapes from the original recording session were used.

PLOT
Secret agent Martin (Merenda) enlists in the mercenary forces that Major Hagerty is training on behalf of an African country. Martin’s goal is to capture the highly sought-after international Sergeant Léon “dead or alive,” and make the million-dollar bounty his own. Although he is the only one to know the details of Léon’s delivery and the only to have the identikit, his mission is not completely secret and the Major, the Polish man and another mercenary want in on the action. The most cunning character of all is Wabu, a friendly villager who pretends to be ignorant and offers to be Martin’s devoted lackey.
Hagerty receives the order to blow up a dam and takes some of the mercenaries with him. At just the right moment he separates Leon from the others, but they are pursued by enemy forces and start to get at each other’s throats. The “bounty hunters” have thinned out when the Major and the seriously injured Martin finally reach their destination. They get rid of Hagerty but are then played for fools by Wabu who, finally speaking in perfect English, reveals his plan to proceed to Switzerland to get the reward.