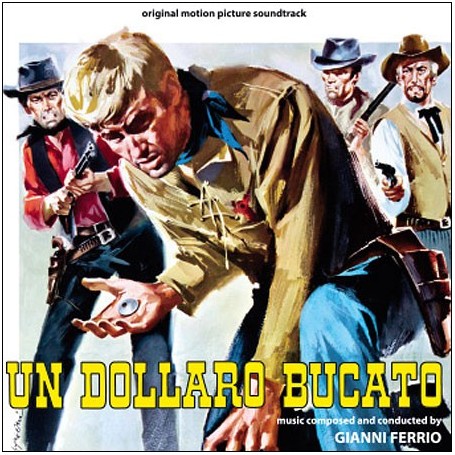 Digitmovies continues to ride through the sunny lands of the Italian Western publishing, for the first time on CD, in a complete edition, the OST by Gianni Ferrio from the film "Un dollaro bucato" ("Blood for a Silver dollar") directed in 1965 by Giorgio Ferroni and played by Giuliano Gemma, Ida Galli, Pierre Cressoy, Giuseppe Addobbati, Franco Fantasia, Tullio Altamura, Massimo Righi, Nazzareno Zamperla, Benito Stefanelli, Franco Lantieri, Nicholas St. John, Andrea Scotti, Bernard Farber, Peter Surtees. Phil (Zamparla) and Gary (Gemma) are two brothers who, at the end of the Civil War, leave their country of origin to seek their fortune elsewhere. In Yellowstone, Gary is hired by MacCory, a man without scruples who uses him to kill a foreigner who was interfering in his shady dealings. Yet at the moment of killing him, Gary sees in the man his brother Phil. Now though, it is too late and Gary is gunned down by MacCory's people. Yet Gary is not dead, as the bullet was stopped by a dollar that he carried in his vest pocket. Gary returns to Yellowstone to avenge the wrong done to him. Here, however, he encounters new difficulties, as his wife Judy has fallen into the hands of MacCory and he discovers that the sheriff, to whom he turned for help, belongs to the band of outlaws. Nevertheless, the brave young man manages to dismantle the gang, gaining the trust and gratitude of the inhabitants of the town and the possibility of a new life with Judy. At the time, this OST was released as a single (Fonit SPF 31174) with the song "A Man... A Story" written by Mogol - Pallavicini - Locatelli in one version sung by Fred Bongusto (Tr.21, Tr.27) and an instrumental version performed by the Ferrio orchestra. This 45 rpm single was re-released in Japan by King Records (Seven Seas / Fonit HIT - 1362), where the film had huge success. Not until 1984 did C.A.M. issue a 33 rpm in his limited edition and numbered series Phoenix (LP PHCAM02), which included eleven musical selections combined with excerpts from two other OSTs by Ferrio "Sentenza di morte" and "Vivi o preferibilmente morti", later re-released on CD (CAM 494580). For our CD, lasting 53:00 minutes, we had access to the mono master tapes of the original recording session and to a mono reel, assembled at the time for a 33 rpm album that never saw the light, consisting of twenty selections (nine of which appear here for the first time ever). We also added new tracks with an orchestral background, the song of the single, and three rare stereo mixes discovered in a separate master. Gianni Ferrio adapted the main theme into a symphony version (Tr. 1, Tr.3, Tr.4, Tr.8, Tr.14, Tr.19) alternating with transitions of mystery and tension, which go from calm and suspended, to dramatic and violent, executed with zip by the horn section (Tr.7, Tr.9, Tr.12, Tr.13, Tr.15, Tr.23, Tr.24). In this OST, a delicate love theme emerges presented in instrumental variations (Tr.6, Tr.10, Tr.20) and in a version sung by the wonderful voice of Lydia MacDonald (Tr.11, Tr.26). A CD that sets out to pay rightful homage to Gianni Ferrio's Art of Music.