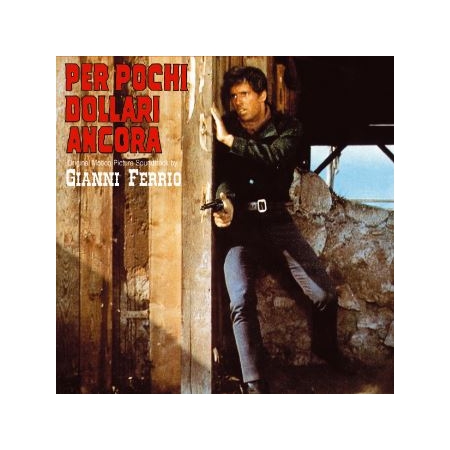 PER POCHI DOLLARI ANCORA (aka FOR A FEW EXTRA DOLLARS) is a Western movie from 1966, directed by Giorgio Ferroni and starring Giuliano Gemma, Dan Vadis, Sophie Daumier, Jacques Sernas, Nello Pazzafini, Lorenzo Robledo, William Spoletini, Jacques Stany, Benito Stefanelli, Antonio Molino Rojo, John Mathews, Mimmo Poli, Jacques Herlin, Men Fury, José Martín, Leonardo Martín, Ángel del Pozo, Robert Alexander, Andrea Bosic, Peter Cabot, José Calvo, Red Carter, Alberto Cevenini and Rick Paper. At the end of the war of secession, while some of the vanquished ones are still in the northern galleys, some groups of irreducible Confederates continue their guerrilla actions. Eight hundred of these men are preparing to assault Fort Yuma, unaware of its effective garrison force and the fact that their commander is in league with a group of criminals and is about to command the horrible carnage just to divert attention from the organized theft of the huge gold reserve kept in the fort. After discovering this intention, the northern authority sends to Yuma three men, a captain and a sergeant from the north accompanied by Gary Diamond, a young southern lieutenant. While the northerners will have to deliver a message to the commander of the Fort with the details of the case, the young one will have to convince the former comrades to desist from the crazy assault. But the company is more difficult than expected, and Gary, after risking death several times, suffering torture of all kinds and overcoming the intrigues of numerous traitors, succeeds just a few seconds before the assault was to begin.

Maestro Gianni Ferrio was prolific artist in the Western genre, too; just remember some of his classic Western scores such as GLI EROI DEL WEST (1963), I GEMELLI DEL TEXAS (1964), UN DOLLARO BUCATO (1965), EL DESPERADO (1967), SENTENZA DI MORTE (1968), VIVA LA MUERTE…TUA! (1971), etc. In 1967, C.A.M. released only a 45 rpm single (AMP 11) featuring the two tracks, “DIAMOND” and “RED MINE DIAMOND.” On the posters of the advertising campaign and in the movie’s opening credits, the name of Ennio Morricone also appeared. This was actually a trick by the production company for marketing purposes, as Gianni Ferrio was the only real composer of the music score and arranger and conductor of several variations of the theme composed by Morricone. Gianni Ferrio wrote an original score incorporating the theme “PENSO A TE” written by Ennio Morricone for the mondo movie “I malamondo” (1964), with fantastic versions arranged and conducted by Maestro Ferrio. The Gianni Ferrio score incorporated virtuous harmonica solos by Franco De Gemini with performances by the choir I Cantori Moderni di Alessandroni. Besides the variations on the theme by Morricone, the composer wrote suspense passages, Latin flavored atmospheres, romantic music and the the saloon music called “DON’T CRY COWBOY,” which is also featured in a lovely version sung by Nora Orlandi. In the bonus tracks section are three previously-unreleased tracks: a rare take of “LOVE TIME” with harmonica performed by Franco De Gemini, a stereo version of “DON’T CRY COWBOY” and an alternate take of “PENSO A TE” with an epic French horn performance. This score returns to the market for all fans of the Italian Western and as a sincere tribute to the musical art of the great Maestro Gianni Ferrio.

The CD comes in a jewel case with a 12-page booklet and with liner notes by Claudio Fuiano.