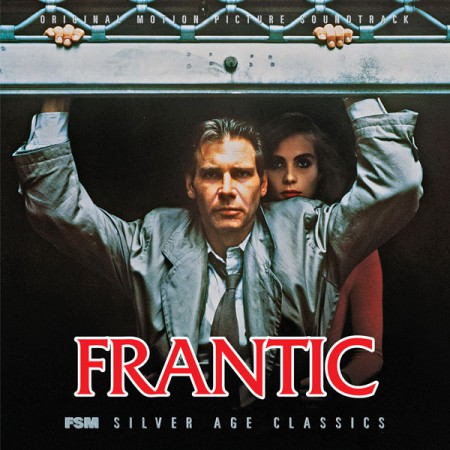 Harrison Ford starred in Roman Polanki’s suspense-thriller Frantic as an American doctor forced to search Paris for his wife (Betty Buckley), who vanishes shortly after their arrival at a conference. Jet-lagged and unable to speak French, he encounters skepticism from the local bureaucracy but eventually picks up her trail—plunging into a seedy nightlife of drugs, murder and international espionage, his only ally a stubborn party-girl (Emmanuelle Seigner).

Ennio Morricone provided the moody yet melodic score, his first and only collaboration with Polanski. The main theme, a melancholy piece of Continental romance, suggests the locale as well as the doctor’s deep affection for his wife. Overall, the score functions as a lament—both for the protagonist’s anguish and for the dead-end life of the girl who assists him.

Elektra Records issued a Frantic soundtrack album on LP and CD in 1988, now long out of print. Much of the music contained on the album does not appear in the picture at all, with other selections significantly altered. Yet the album remains a compelling portrait of Morricone’s work on the film, the longer selections providing a more complete presentation of the themes than the score as heard in the picture.

FSM’s release of Ennio Morricone’s Frantic score opens with a newly remastered presentation of the contents of the Elektra album, followed by the premiere release of Morricone’s complete score as it appears in the film (except for the film version of one cue and an alternate take of another), mastered from three- and four-track 35mm dubbing units (the only available sources) edited to reflect Polanski’s use of the score in the finished film. The accompanying 16-page booklet, designed by FSM art director Joe Sikoryak, features authoritative liner notes by Lukas Kendall.