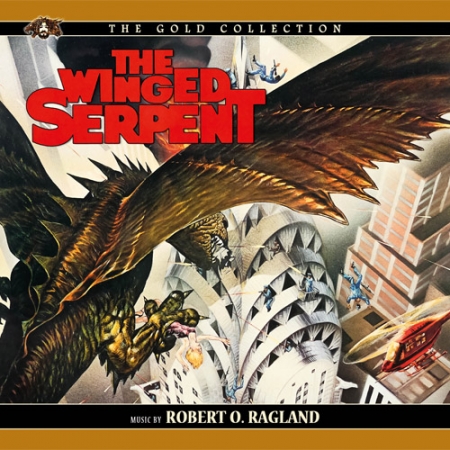 Kronos Records is extremely proud to release the soundtrack of Larry Cohen's 1982 Monster Movie Q- THE WINGED SERPENT. Music by the very talented and under represented composer ROBERT O. RAGLAND.

The Aztec god Quetzalcoatl, a winged, dragon-like, female lizard, takes up residence in the art-deco spire of the Chrysler Building, with frequent jaunts in the midday sun to devour various hapless New Yorkers. The resulting bloody mess confounds detectives Dt. Shepard (David Carradine) and Sgt. Powell (Richard Roundtree), who are already occupied with a case involving a series of bizarre ritual murders linked to a secret Aztec cult. Meanwhile, Jimmy Quinn (Michael Moriarty), a cheap, paranoid crook who wishes to be a jazz pianist, takes part in a botched diamond heist that leads him to the creature's lair atop the building. This causes Quinn's attempts to settle down and turn over a new leaf from crime to be in vain as he decides to extort from the city an enormous amount of money in exchange for directions to the creature's nest, which houses a colossal egg.

The details of the location fall into Shepard's hands, and he leads a paramilitary assault on the Chrysler Building. First, they shoot the egg, the baby attacks and is killed. Later, the creature comes to the tower. After the showdown, the creature, riddled with bullets, falls onto the streets of Manhattan. Finally, Shepard also apprehends and shoots the Plumed Serpent's crazed priest as he prepares to ritually murder Quinn to resurrect his "god". In the final scene, a large egg hatches.

Ragland's orchestral score is a real show of force and one of the cases where the score clearly outshines the film! despite the film also carries a charm of its own, belonging to the early 80's. The score is a strong, very melodic and rhythmic one. A fine example of Ragland's skill at writing a big orchestral score that never fails to entertain and thrill. Our release features also previously unrelease material that was not featured on the previous CD release of this score 21 years ago on CAM. Featured along the bonus orchestral tracks is also a bonus song "Let's Fall Apart Together", previously featured only on the Cerberus version of the LP from 1983.

Featuring over half an hour of previously unreleased music!!!