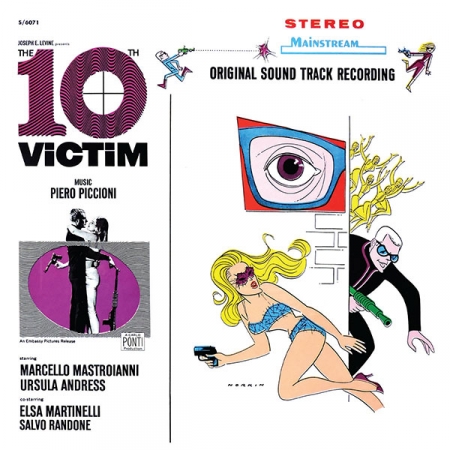 THE 10TH VICTIM / THAT MAN IN ISTANBUL

Two original 60’s soundtrack albums on one CD! In a world of super long multi-disc releases, expanded reissues and like musical fare, Intrada simply offers two soundtracks from 1965 together on a single CD, both presented from the original album masters vaulted and controlled by the wonderful Mainstream label - a label familiar to all fans collecting soundtracks throughout the 60’s and 70’s. These appear in their original U.S. versions, exactly as first issued, including beautiful reproductions of their colorful album jackets as part of our flipper-style CD booklet. The 10th Victim showcases Piero Piccioni in a classic mod-60’s sci-fi thriller mold, spotlighting that musical style known as “lounge”, a 1950’s-1960’s easy-listening format that enjoyed a massive resurgence some three decades later. Joseph E. Levine presents, Carlo Ponti produces, Marcello Mastroianni, Ursula Andress, Elsa Martinelli, Salvo Randone star, Elio Petri directs from Robert Sheckley’s “Seventh Victim”, originally published in the April 1953 issue of Galaxy Science Fiction. Much of the impact of this score and its subsequent lounge interest is derived from the wildly hypnotic recurrence of its infectious main theme. Amongst the hip flavors and colors of the tune, listeners will find the organ featured in rare jazz mode. Wild is the word! That Man In Istanbul is Columbia Pictures’ 1965 entry into the Euro-spy thriller genre. Horst Buchholz stars, Sylva Koscina and Mario Adorf assist, Antonio Isasi directs on colorful European locales. Georges Garvarentz writes with nods to James Bond and similar secret agents of the day. Brass dominate, exciting sequences play with a deft balance of intrigue and action. Garvarentz also penned a beguiling pop tune, drawn from his main love theme and titled “Love Was Right Here All The Time”, sung by Richard Anthony. While working with the master tapes for this CD release, Intrada discovered a second, more energetic closing version of the vocal number that had been assembled for but never included on the original 1965 release. It appears as the closing track on this CD. Interestingly, while both albums proudly sported the “stereo” nomenclature on their covers, in fact neither soundtrack was presented in that mode. As was customary with numerous soundtrack albums originating from Europe during that era, the music was made available in mono only, and stereo reverb and other audio “enhancing” techniques were utilized during mastering of the American albums. The results by today’s standards are quite thin. Upon auditioning both modes, we opted to retain the pseudo-stereo versions over their mono counterparts as those not only exhibited the same thin audio as well but are generally considered of lesser interest to collector’s of the original albums, Piccioni’s score in particular. Booklet design by Kay Marshall, notes by Scott Bettencourt. Intrada Special Collection CD available as long as quantities and interest remain!