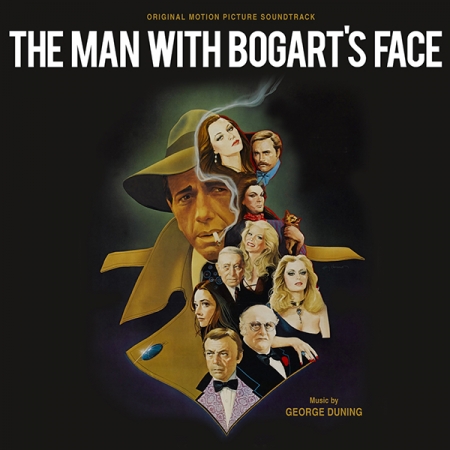 THE MAN WITH BOGART'S FACE

Adapted from his 1976 novel, Andrew J. Fenady brought The Man With Bogart’s Face to the screen in 1980. Starring Humphrey Bogart look-alike Robert Sacchi, the movie was directed by Robert Day (The Haunted Strangler, Corridors of Blood, Two-Way Stretch, Tarzan the Magnificent, and many others). Also in the cast were such expert players as Victor Buono, Yvonne De Carlo, Herbert Lom, Mike Mazurki, Michelle Phillips, George Raft, Sybil Danning, Jay Robinson, Franco Nero, and Misty Rowe.  Despite the catchy title and excellent cast, the low-budget film was released in 1980 to not much business but did garner some decent reviews.  Variety was very positive, saying, “… a continuous flow of laugh lines. It adds up to a lot of fun.”

Fenady’s choice for composer could not have been a better one – the great George Duning, who was nearing the end of his impressive career. Duning had already written a huge number of incredible scores, including Salome, The Man from Laramie, Tight Spot, 5 Against the House, Picnic, The Eddy Duchin Story, Nightfall, Full of Life, Jeanne Eagles, 3:10 to Yuma, Operation Mad Ball, The Brothers Rico, Cowboy, Me and the Colonel, Bell, Book, and Candle, Strangers When We Meet, Two Rode Together, The Devil at 4 O’Clock, Houseboat, The World of Suzie Wong, Who’s Got the Action, Any Wednesday, The Wreck of the Mary Deare, Critic’s Choice, and Toys in the Attic. He was nominated for the Academy Award five times.

For The Man With Bogart’s Face, Duning came up with a really fun score, including it’s wacky and very funky main title song – which went on to win the very first Razzie Award for Worst Song. Very typical of its period, the song is just what you’d want it to be. But the rest of the score is Duning in Duning territory – noirish cues, action cues, and, like every score he ever wrote, his cues are filled with his wonderful melodies.

This release was mastered from a mono tape that came from the composer. While the sound was not optimal, mastering engineer James Nelson labored mightily to clean it up as best he could, and he’s done a great job doing so.