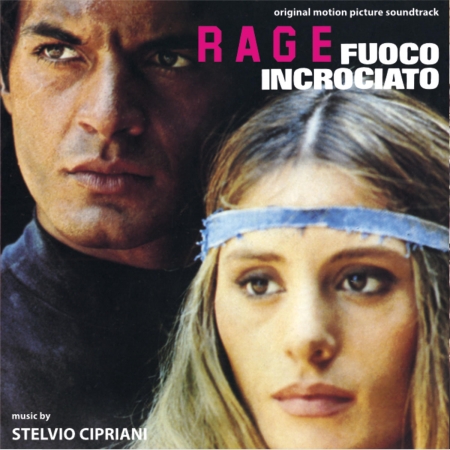 Digitmovies is releasing for the absolute first time on CD the OST by Stelvio Cipriani for the adventure film “A Man Called Rage” (orginial title “Rage- Fuoco Incrociato,” aka “Fuego Cruzado”).

This orchestral / electronic score by Stelvio Cipriani has finally been dug out and is released for the first time on CD in its complete version. In 1984 Cinevox Records released an LP (MDF 33.166) with twelve tracks (33:39 minutes). In addition to the stereo master tape assembled for the original album, we discovered almost 13 minutes of previously unreleased material in mono that brings our CD to a total time of 46:12 minutes. For the composer, this OST marks a very important moment in the lives of cinema and soundtracks fans: an unforgettable first encounter with Maestro Cipriani which took place in the summer of 1984 (thanks to composer and friend Marco Werba) just as he was recording and mixing music for this film.

Stelvio Cipriani composed a score where the orchestra performs an epic main theme with a holy atmosphere and frequent pop rhythms which accompany Rage’s heroic endeavors  through a place where fiendish traps and deadly dangers are always lurking. The author alternates solemn pieces (Tr.1, Tr.4, Tr.5, Tr.8, Tr.11) with suspenseful pieces (Tr.6, Tr.7, Tr.9, Tr.10, Tr. 12) and pieces of pure action typical of the '80s (Tr.2, Tr.3). One remarkable finding was the long version of “Esplorazione della base” ("Exploration of the base") (Tr.17) with well over 7:36 minutes compared to 2:43 minutes on the album take. This CD will be added to the discography of the legendary Stelvio Cipriani (which has expanded in recent years thanks to fantastic discoveries and rediscoveries in various archives), one of the most prolific composers of film music from the sixties to today. He is loved around the world by loyal fans who follow his every record release.