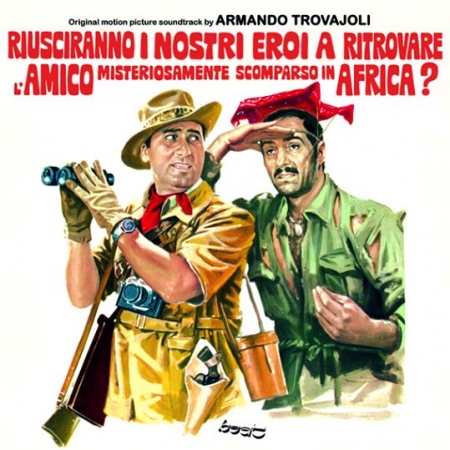 One hundred years after the birth of legendary Maestro Armando Trovajoli and shortly
after distributing the wonderful score to Lovemaker (on Pentamusic), Beat Records
is proud to continue its homage to the great friend of the Roman label’s historical manager
Franco De Gemini with this release, posing as a tribute for the 50th anniversary
of a cult movie of the late ‘60s directed by Ettore Scola and starring Alberto Sordi and
Nino Manfredi, Riusciranno I nostri eroi a ritrovare l’amico misteriosamente scomparso
in Africa.
It’s the story of Fausto Di Salvio, a Roman publisher who embarks together with accountant
Ubaldo Palmerini (Bernard Blier) on a journey to search for Titino Sabatini
(Nino Manfredi), who disappeared in Angola. Following his movements, they are
eventually led to his tombstone by a would-be lover of his (Erika Blanc). The story
seems to close with this discovery, but soon after coming back to Italy, insights provided
by the Portuguese Pedro (Manuel Zarzo) will reopen the story.
At the time speaking, the movie’s score was released on a RCA LP featuring 12 tracks
and again on CD in 2005 by GDM, both times incomplete. For this definitive edition
on CD, we present again all the stereo tracks of the original album plus bonus tracks
in mono, including one apocryphal dance version of the main theme recorded one
decade later, a testament to the Maestro’s love for this soundtrack.
Shake, bossa, ethnic and lounge music realized performed by a symphonic orchestra
(featuring the choir I cantori moderni di Alessandro Alessandroni) are all aspects of
one of the most beautiful scores ever composed by the Maestro, for this cult movie to
which we wish a happy 50th year of life!
The CD comes in a jewel case featuring a 12-page booklet designed by Daniele De
Gemini, mastering and liner notes by Claudio Fuiano. Limited Edition. 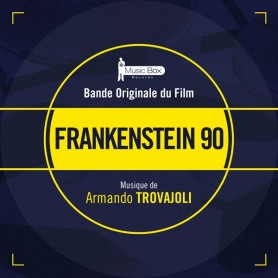