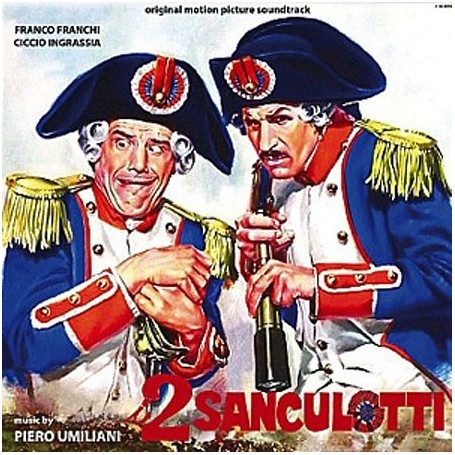 Digitmovies publishes the full soundtrack to the movie "I due sanculotti".
Soundtrack information:
The soundtrack of the film was entrusted to Maestro Umiliani, (1956-1984) a
prolific author of soundtracks who was active from 1958 to 1984. He made his
debut as a musical composer for film, in 1958 thanks to Mario Monicelli, who
called him to compose the musical score for the movie “I soliti ignoti” (starring
Totò, Vittorio Gassman, Marcello Mastroianni, Nino Manfredi). Given the
success of the film, in the following years Umiliani was called by the great and
good of Italian cinema: Dino Risi, Luigi Comencini, Nanni Loy and Luigi
Zampa. His professionalism, preparation and researching of the great jazz
masters made him one of the greatest composers. His filmography spans
virtually all genres. From comedies starring Totò or Franco and Ciccio to
espionage, from westerns to thrillers, from documentaries to drama all the way
up to horror. Digitmovies goes a step further by publishing Maestro Umiliani’s
soundtracks, after previously releasing music for the films “La vendetta di
Lady Morgan” (CDDM225), “Una bella grinta” (CDDM240) e “I due
parà” (CDDM243).
Movie synopsis:
“I Due Sanculotti” directed in 1966 by Giorgio Simonelli
The story of two men's experiences of being captured and released during the
French Revolution.
Story:
France, and it is the eve of the French Revolution. Franco and Ciccio La
Capra come to Paris in search of work. They manage to find a job at a fashion
house for noblewomen run by Mr François (Pavese). Franco is spotted by the
noble Deville (D'Orsi) because of his resemblance to the King's brother, the
Count d'Artois. The Count needs to go to Vienna in order to seek help from
the Austrians for the impending insurrection. Therefore Franco must
impersonate the count during the customary reception held in the villa of the
King's brother. Meanwhile, Ciccio plays the role of an Austrian nobleman,
Baron Fon Ciccenburg. At the beginning of the revolution Franco and Ciccio
are captured by the Sans-culottes (French revolutionaries). However, they are
freed with the help of the Primula Rossa who is a sort of gentleman-hero. After
becoming the general of the French army by chance and upon meeting
Napoleone Bonaparte (Lionello), Franco and Ciccio are sentenced to the
guillotine, only to be again saved by the Primula Rossa. After discovering the
real intentions of their saviour, the La Capra now decides to run away.
Starring: Franco Franchi, Ciccio Ingrassia, Silvano Tranquilli, Barbara Carroll,
Oreste Lionello, Giustino Durano, Umberto D'Orsi, Luigi Pavese, Heidi
Hansen.
About the 2 main actors:
The artistic partnership of Franco Franchi and Ciccio Ingrassia began in the
mid-50s. The two comedians began their acting careers (which soon turned
into a deep friendship) in the theatre. The film debut came thanks to a meeting
with one of the pillars of Italian song writing- Domenico Modugno. Domenico
convinced them to participate in the film "Appuntamento a Ischia”, directed in
1960 by Mario Mattioli. Thanks to Modugno, the two Sicilian comedians were
cast in many other films as well. Their debut came in 1961 as protagonists in
the film "L’onorata società" (The honored society) directed by Riccardo
Pazzaglia. In the coming years the two made around 130 films, almost all of
them in the 60's. Just like the films starring Totò, Franco and Ciccio's films
were greatly welcomed by the public but snubbed by the critics. This CD is our
heartfelt tribute to the unforgettable career of two comedians who have left an
indelible mark on Italian cinema.