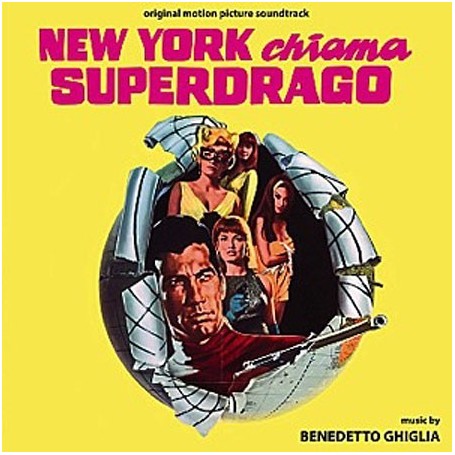 Digitmovies is pleased to venture into the wide world of Italian style Spy
movies once again by releasing, for the first time on CD, the OST by
Benedetto Ghiglia for the movie "New York chiama Superdrago" ("Secret
Agent Super Dragon").
Soundtrack information: (CD 67:52 minutes)
Benedetto Ghiglia has composed a rousing orchestral OST that alternates
between mystery and suspense. The action scenes in the movie feature
swing, blues, latin and jazz music. As the credits roll, the author had an
ingenious idea: he incorporated the sound of a phone in the orchestra.
Another highlight of the piece is the wild "Super dragon Shake". This plays
during the scene set at the bowling alley when Cooper glances at the young
and beautiful Solvi Stubing, (we remember her as the girl from the Peroni beer
commercials) who is merrily dancing away near a Juke-box next to other
young men and women. For this CD we were able to access the mono master
tapes from the original recording session where we discovered about 25
unedited minutes. Previously C.A.M had issued a 33-rpm (CDR 33.16). It
featured twenty-one mono tracks for a total duration of 43:01 minutes but is no
longer available.
Movie synopsis:
directed in 1966 by Giorgio Ferroni “Secret Agent Super Dragon” is about
Super Dragon and his sidekick fighting against a criminal gang who try to gain
control of the population by giving them a drug which causes them to lose
their willpower.
Story:
The "lupi neri" (black wolves) are a criminal gang led by Fernand Lamas
(D'Angelo). They are preparing a diabolical plan. American college students
are forced to ingest "Syncon 2", a powerful drug that causes a loss of will, so
the gang can then control the future American ruling class and their military
leaders. The effects are so terrifying that Bryan Cooper, secret agent Super
Dragon (Danton) is called into action. After various adventures, Cooper
discovers the band's emissaries and identifies their operational base in
Amsterdam. In the city, Super dragon and his sidekick Baby Face (Hahn)
come under various attacks. However, they manage to survive with the help of
equipment built by Baby Face during his imprisonment in Sing Sing. During a
meeting of the gang leaders in Lama's palace, there is a discussion about a
way they’ve found to spread the drug through liquid or gas form. Super
Dragon is able to photograph the formula to the antidote. He ends up being
discovered and engages in a dramatic final fight. Finally he is able to eliminate
his opponents and destroy the diabolical laboratory.
Starring: Ray Danton, Marisa Mell, Margaret Lee, Jess Hahn, Carlo D'Angelo,
Adriana Ambesi, Marco Guglielmi, Solvi Stubing, Gérard Herter, Jacques
Herlin, Nello Pazzafini, Renato Romano, Benito Stefanelli, Christia Hester,
Carlo Hintermann, Artemio Antonini, Pinkas Braun..