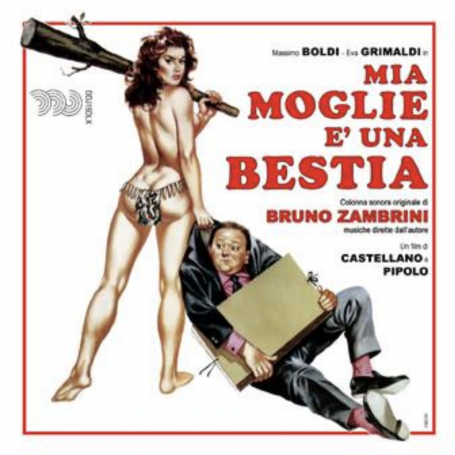 We kick off 2018 with a release dedicated to a Maestro whose music has been the subject of many Beat Records releases for the past year and a half, Bruno Zambrini.
Zambrini's restless work on the pentagram was employed by cinema thanks mostly to his collaborations with Neri Parenti, but in this case we're talking about a score composed for a late ‘80s movie directed by Castellano and Pipolo, Mia moglie è una bestia.
It's the story of a cave girl frozen in ice (Eva Grimaldi) who's discovered by Gianni Bertani (Massimo Boldi) while skiing in the mountains. Once thawed, she mistakes her savior for her near-identical Stone Age lover, setting off a series of wacky situations including an attempt to vivisect the cave girl (!), but after many twists and comical misunderstandings, the story closes the circle of love that began so long ago…

For this funny story that deals lightly with eternal love, the task of composing the score fell on a Maestro much loved by Beat Records, a fine composer who by that time already had valuable experience in pop and a career in the film industry. Already represented in our discography by the
beautiful scores Fracchia contro Dracula, Fantozzi subisce ancora, Scuola di ladri and Sogni mostruosamente proibiti, the famous composer starts this new adventure by giving his score a particularly modern touch. A robust rhythm section is the base for melodies painted on the pentagram with xquisite taste, and the main titles are a real electronic hymn to the new emerging taste of the period for synthesizer music.
The composer's palate emerges in many situations in which we feel like we've been dropped right in front of a pop chart in the late '80s, an electric and eclectic kaleidoscope that, honestly, when separated from the movie, has an even more understandable, surprising and evident potential.
We do not miss atmospheres, romantic and descriptive themes, but most of all a significant vocal cameo by Massimo Boldi during the end credits…
''My wife is wild, she kisses and bites!''
Absolute cult!

This DDJ DLX CD comes in a jewel case with a 16-page booklet designed by Alessio Iannuzzi, mastering by Claudio Fuiano and liner notes by Daniele De Gemini. Limited edition of 500 copies!