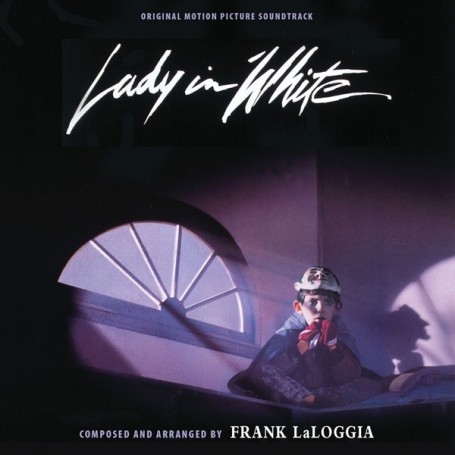 Richly rewarding symphonic score by Frank LaLoggia for 1988 supernatural Halloween tale! Lukas Haas, Len Cariou, Alex Rocco, Katherine Helmond star, Russell Carpenter (Oscar winner for Titanic) photographs… and composer LaLoggia does triple duty with writing, directing duties as well. Rare is it that a director scores his own film, but rarer still is it that a director who scores his own film writes in the grand symphonic tradition, drawing inspiration from Elmer Bernstein, John Barry and similar classic composers no less! How many directors can claim knowledge of the music of Hans Salter, much less compose with his music in mind?!! But such is Frank LaLoggia. Themes and motifs abound but glue holding all together is harmonic vernacular: major key-oriented in thematic ideas, sparse and intense in action material. Standout features are two-fold: Hauntingly beautiful major key themes play in warm, nostalgic manner while dynamic action and horror elements appear via fortissimo low brass in unison. Equal parts tender and expressive, frightening and ferocious! LaLoggia describes film as being about his fondest memories of being a child… and his most frightening nightmares. The music vividly illuminates his pursuit of visual (and aural) “underlying theme of loss, of coming to terms with loss - or not coming to terms with loss.” Score was originally available on limited Netherlands label SouthEast Records from 1995. Intrada 2017 CD release features same musical content but has been completely remastered for better audio dynamics. Presentation is in four generous suites, edited by LaLoggia and his engineer Fir Suidema for strong musical coherency and rewarding listening. Two early electronic versions of LaLoggia’s music are included as “extras”. Film artwork and images included in booklet courtesy MGM, informative liner notes by Scott Bettencourt, additional commentary from the composer who also supervised this entire presentation and package design by Kay Marshall. Included with this release is a “bonus” second CD entitled Frankie Goes To Tuscany which is devoted to original music LaLoggia composed for listening that he describes as “a film score in search of a movie.” Intrada is happy to provide a platform for hearing this imaginary score! Frank LaLoggia composes and arranges both discs, John Massari orchestrates and conducts Lady In White. Intrada Special Collection CD available while quantities and interest remain!