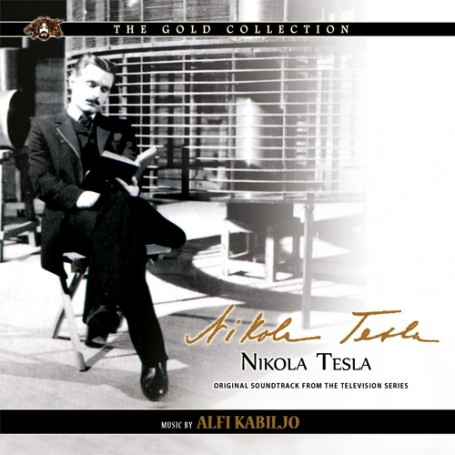 Kronos Records is immensely proud to present a world exclusive: the soundtrack CD of  Eduard Galic's NIKOLA TESLA, a Croatian television series (from RTZ – Zagreb Radio and Television at the time) about the world reknown Serbian-American inventor, electrical engineer, mechanical engineer, physicist, and futurist. The series is from 1977.  The soundtrack was previously released only as a Composer-promo and not available to the general public.  We are very happy to work again with our friend, the very talented composer Alfi Kabiljo. After the medieval epic THE FALCON (still available from us) we proudly present you with NIKOLA TESLA, definitely one of the most exciting and beautiful scores we ever released!

In his search for the best way to put into music the life and work of this famous scientist, Kabiljo relied on his usual composing technique: a combination of 20th century music which admits everything that "sounds" but rejects tonality, and elements of film music standards (and pop music standards) with clear harmonies and tonal functions. Given the fact that the TV serial is built in the form of a flashback, at the beginning Tesla is actually at his end. At the end of his life path he is able to look back, to consider it all from another perspective, maybe more objectively, not regretting anything but taking active part in it emotionally. His lyrical  childhood has been composed almost like an idyll ("Childhood", "Flight", "Wings") and the mother's theme is also lyrical although it abandons the level of carelessness and brings into the score a kind of calm seriousness. The mother character opens the possibility for the composer to turn to folklore elements ("Mother's Death"), which describe his childhood place as well ("Old Country").

In those part of the serial dealing with Tesla's travels, Kabiljo reacted in a Hollywood style: for every city (Prague, Paris, Budapest, New York, Strasbourg, London) he used something typical – the street organ (for Paris), the Czardas (for Budapest), the waltz (for London), symphonic jazz for (New York), and even a popular domestic song (for the Old Country). The music reflections of the world's great cities are so clear that they speak about Tesla's travels even without any image. But, of all the different themes the "American" one has prevailed over the others, having depicted in a specific and recognizable manner the chapters entitled "Passage to America", "New York", "New York Hotel" and " The American Garden". Namely, Tesla spent a significant part of his life in the USA.