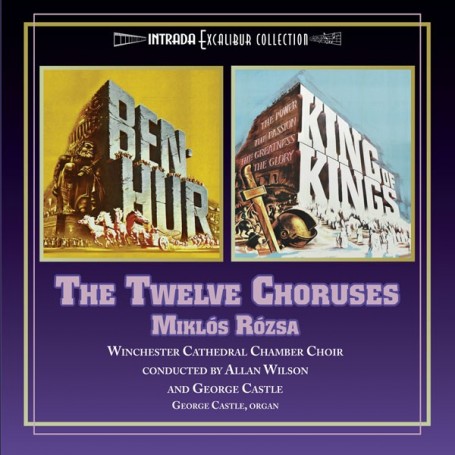 In modest departure for Intrada's Excalibur Collection, we stay ostensibly with film scores by Miklos Rozsa but travel into his original choral writing domain. Project is a favorite of our conductor, Allan Wilson, encompassing twelve choral presentations drawn from Ben-Hur and King Of Kings, prepared for public performance by school, church choirs, albeit not necessarily intended for performances of all twelve at once. Intrada release is first in decades to feature entire cycle. Most were arranged by Rozsa shortly after respective films were relased (1959, 1961), published by Robbins Music, publishing arm of MGM, with all of them scored for chorus plus either piano or organ. In this recording, organ is heard. Two include then newly-composed material: "The Mother's Love", "The Sermon On The Mount", making them of particular interest. Rozsa made no attempt to literally transcribe his orchestral sonorities into these pieces, rather he exploited colors, ideas best represented in choral terms. Fun to note this present recording came about after Intrada premiered Rozsa's The Red House, where chorus was needed in certain key sequences. Working with conductor Wilson, producers Paul Wing, Paul Talkington, it was natural to engage superb singers of Westminster Cathedral. That fortuitous relationship led to current choral recordings. In addition to "The Twelve Choruses", Intrada CD features incredibly complex original Rozsa choral work, drawn from text of "The Twenty-Third Psalm, Op. 34." This remains one of Rozsa's most challenging choral pieces, with multiple tonal centers, challenging rhythmic material maintaining interest throughout. Notes by Frank DeWald, conductor Allan Wilson, engineer Niall Acott. George Castle plays organ. Allan Wilson, George castle conduct Winchester Cathedral Chamber Choir. Beautiful music results!