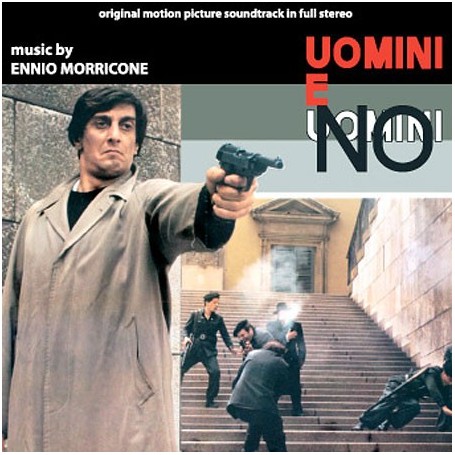 Digitmovies releases a rarity by Ennio Morricone: the complete original motion picture soundtrack from the 1980 movie “Uomini e no” (aka “Men or not men”) directed by Valentino Orsini (Pisa, 1927 – Rome, 2002). This movie gave the director (who started to work for Cinema with the Taviani brothers) the opportunity to come up with a subject so particular to him: the Italian Resistance, a period of great importance both historically and morally (in fact, the same very young director participated to the Resistance). The movie is based on the Elio Vittorini novel issued in 1945. It tells the story of Enne 2, commander of a partisan group that performs terrorist actions against the Nazis in Milan. He acts in a world crushed by the war, but his uncertainty corresponds to his uncertain love for Berta, they meet again years later, the attraction for his girlfriend Lorena. After an assault on the fascist court he is recognized. Since the house is surrounded, instead to escape, he jumps towards the leader of the Nazi squad with explosives strapped to his body. This CD, approved by the author, was made possible thanks to the help of C.A.M., in whose archives the original recording session stereophonic master tapes have been preserved for two-and-a-half decades. In 1981, on the 33 rpm compilation album “CIAK” (WEA T 28271) only one track called “Fucilazione” was issued from this Ost (then re-issued on the CD “La Notte di San Lorenzo e il Cinema Civile” CAM 493067-2). This particular track opens our Cd with an extended version (Tr.1) where an organ mix anticipates the sorrowful love theme for the two protagonists. Ennio Morricone has composed and conducted an orchestral score based on two main themes. The first one is a mysterious march with brass and percussions ostinato varied in its speed, sometimes slow, sometimes fast, reprised in Tr.2 ,Tr.5, Tr.7,Tr.9,Tr.11. The second theme is a sad and melting love theme with classic flavour. These two different themes represent perfectly the two faces of war, that one of strategies, attacks, revenges, death and pain and that other of the protagonist and his inability in desperate search for love, that becomes impossible by the tragic mood of the war conflict: Tr.2 (for flute, oboe and orchestra), Tr.4 (for flute, violin and orchestra), Tr.6 (for harpsichord, flute and orchestra), variation on the main theme after a solo violin introduction (Tr.8), in a slower version (Tr.10) and then a conclusive reprise for oboe, harpsichord and orchestra (Tr.12).