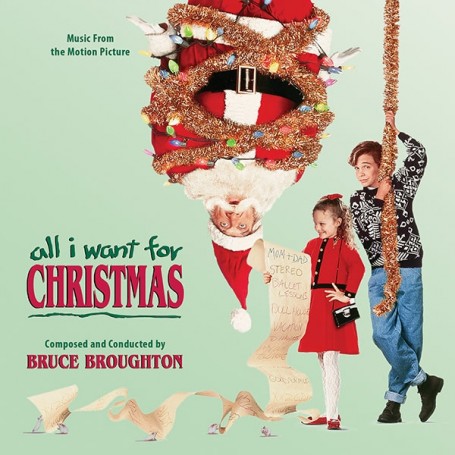 ALL I WANT FOR CHRISTMAS

Tis’ the season! Bruce Broughton score for Paramount’s holiday gift for Christmas 1991 gets attention at last! Harley Jane Kozak, Jamey Sheridan are divorced mom and dad, Ethan Randall and then 9-year old Thora Birch play the kids (Ethan and Hallie), Kevin Nealon, Lauren Bacall, Leslie Nielsen (as Santa Claus) provide the sweet-sentimental support. Warm, funny film is the kind in which, in Broughton’s own words, “You like the people and you like what happened and you like the result, and it came out pretty much the way you hoped that it would.” Broughton scores for orchestra with several ideas ranging from heartfelt strings and guitar reflecting the love story, cues for the seasonal atmosphere appropriately scored for piano, sleigh bells, glockenspiel, celesta, triangle, upper woodwinds and vibraphone to more dramatic - even exuberant - full orchestral sequences. There are also gently playful ideas for “Snowball”, the white mouse, Hallie’s beloved pet. ”The scoring needs of the picture were economical and the cues often necessarily short, but even with the briefest of cues, Broughton ensures they have thematic unity and play as complete pieces, much like an extended “divertimento” for orchestra. He got the assignment from the director based on his work for Silverado and his approach here offers similar nods to an open-air Americana musical vernacular. The entire original score appears, mastered from the complete digital two-track session elements courtesy Paramount Pictures, mixed by veteran scoring engineer Armin Steiner. Sessions were held at the 20th Century Fox Scoring Stage in October 1991. An album on the Curb Records label was issued at the time of the film’s November 1991 premiere and divided between original songs by David Foster and Linda Thompson, traditional Christmas music by various artists and six score selections. This Intrada CD focuses solely on the complete score by Broughton plus the source music he either wrote, arranged with orchestrator Don Nemitz or conducted during his sessions. Broughton did prepare an instrumental arrangement of Foster’s gentle song for one scene in the picture and it is premiered on this CD as well. Graphic presentation by Kay Marshall. Notes by Tim Greiving include numerous quotes from newly-interviewed director and composer. Don Nimitz orchestrates, Bruce Broughton composes, conducts. Intrada Special Collection CD available while quantities and interest remain!