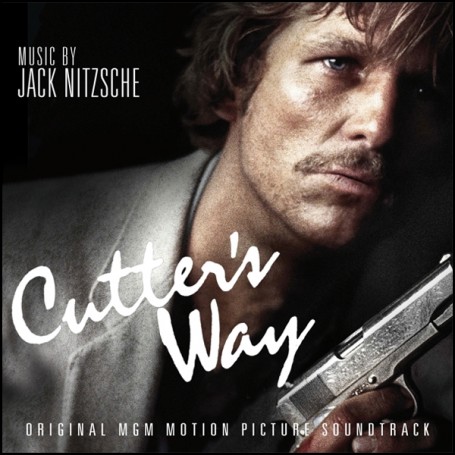 Quartet Records and MGM present the world premiere release of the masterful score by Jack Nitzsche (One Flew Over the Cuckoo’s Nest, Starman, Hardcore, The Indian Runner) for the cult classic Cutter’s Way, directed by Ivan Passer in 1981 and starring Jeff Bridges, John Heard and Lisa Eichhorn.

One rainy night, Richard Bone's (Bridges) car breaks down in an alleyway. He spots a large, mysterious car in the distance. A man dumps something into a garbage can. At first, Bone thinks nothing of it and proceeds to meet his friend, Alex Cutter (Heard). The next day, a young girl is found brutally murdered in the same alleyway where Bone had abandoned his car. He becomes a suspect. When Bone spots the man he thinks is the murderer in a parade later that day—local tycoon J.J. Cord (Stephen Elliott)—Cutter begins to take an interest in the mystery that unfolds. His interest soon becomes a conspiracy theory that develops into a troublesome investigation with his skeptical friend and the dead girl's sister (Ann Dusenberry) along for the ride.

Jack Nitzsche was a unique, personal voice in the films of ’70s and ’80s. Visionary, excellent producer, pioneer of electronics... His not-too-prolific but brilliant soundtrack career still stands as one of the coolest. For Cutter’s Way, Nitzsche created a sound structure with unusual instruments (glass harmonica, zither, electric strings) to show the world of cynicism, crime and political privilege, as well as the atmosphere of nostalgia that abounds in the film. Because the film is set on the Mexican border, Nitzsche also adapted and recorded several cues in mariachi style; Mexican flavor can, in fact, be heard throughout the score.

Mixed and mastered by Mike Matessino from the original 24-track sessions, we’re glad to present all that Jack Nitzsche recorded for the film, including the source music and some demos. The package includes a 20-page full-color booklet with in-depth liner notes by Daniel Schweiger.